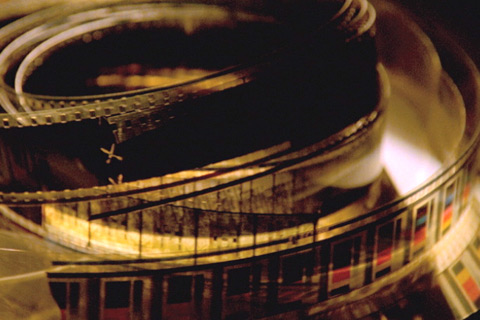 With Oscar time approaching and movie-going, as well as, movie-giving a holiday tradition for many families, I decided to post a list of some films that are fun for editors to watch. These aren’t all Oscar-contenders, although there’s plenty of bling in this list. They are presented in no particular order, so I hope you enjoy.

This is the newest film in the batch and I found it to be not only well-crafted, but also beautifully shot (cinematography by Robert Richardson). Tarantino draws a lot of opinions, but it’s clear that his approach to shooting and editing uses a very classic style. Pay attention to the dialogue scenes and you’ll agree that Tarantino is probably the best director today in structuring and directing dialogue-driven films.

This quirky film is best known for the way the plot is revealed in reverse. In fact, there’s a DVD version that lets you run the scenes from back-to-front in a somewhat linear, chronological order. Although you’d think the scene construction is a contrivance developed in the cutting room, Dorn is the first to admit that this was actually how the script was written.

Slumdog Millionaire beat it out for best cinematography, but nevertheless, Button is a gorgeous example of how digital films can look (cinematography by Claudio Miranda). The aging VFX are the hook, of course, but they work well in service of the story. The editing helps to move the story along, aiding the matter of fact way in which the story is told by its characters.

I enjoy documentaries, but they don’t get any better than when the actual events take plot turns as if they were scripted. In this story about paraplegic rugby, the participants are like gladiators in wheelchairs. It was shot with a variety of DV cameras, but the editing pace makes that something you’ll never obsess over. Natural rivalries develop and this story is a blast for anyone who loves films about sports and sports personalities.

Scott’s film about the horrific events in Mogadishu is a seminal war film – representative of the surrealism of conflict in ways that a film like Apocalypse Now could never do justice to. It’s also a movie that I feel was largely built in the edit bay. Dump a bushel basket of disjointed combat footage on the editor and see what you get.

Pick any or all of the three. They are all great. The main criticism leveled by others is the shaky-cam style of shooting and the frenetic ADD cutting. Not something that bothers me in the least. Nevertheless, the films are a fast ride for the audience and exemplify good, fast-paced cutting. It’s all the more helped by the believability Matt Damon brings to the role.

This 2003 remake probably didn’t make many “best lists”, but I enjoyed the film. It’s a nicely crafted caper flick without many flaws. You’ll notice the deft editing Christopher Rouse (The Bourne Ultimatum) brings to the movie. Plus a really cool car chase scene with Minis!

This is Coppola’s first digital film. It was shot in Romania and is highlighted by some gorgeous cinematography (Mihai Malaimare, Jr.) and a very evocative score (Osvaldo Golijov). It’s a very romantic and surrealistic tale that will keep you enthralled until the end.

This film is credited with starting the move to DI finishing, thanks to DP Roger Deakins. It’s got a great look and the story shows the Coens at their best, with homages to The Wizard of Oz and Homer’s epic poem, The Odyssey. I happen to like George Clooney when he plays the buffoon and the stellar cast of O Brother never disappoints in the madcap category.

Although technically a documentary, Shine A Light is one of the best concert films in years. I’ve cut my share of concert shows, so I was cutting this one right in my head the whole time I was watching. It’s certainly a fun cut and one that gives you an intimate look inside the performance. Coupled with a Bob Clearmountain live music mix, you’ll feel like you’re right in the middle of the Beacon Theater when you watch this one.

I saw this again the other night on Comedy Central and it was hilarious. This is a Wright/Pegg (Shaun of the Dead) spoof of cop/buddy films, that has more action than most action films. Pay close attention to the cutting, as this film has over 5,000 picture edits! Dickens picked up an Oscar for Slumdog Millionaire, but this effort is no less inspiring for other editors. There is some over-the-top violence (a la Monty Python), but in spite of the parody, Hot Fuzz holds up well against “legitimate” action films like the Bourne franchise.

Daniel Day-Lewis is totally captivating as oilman Daniel Plainview in this film adaption of Upton Sinclair’s Oil! This is also a look at the beauty of film at its best, done the “natural way” – i.e. no DI. Kudos to Robert Elswit, whose cinematography has a real richness to it. For the editors in the crowd, pay attention to the first portion of the film. Tichenor does a masterful job of advancing the story over many years of Plainview’s life without any dialogue.

Well, that’s a quick look at a dozen films for the holidays. Have fun!