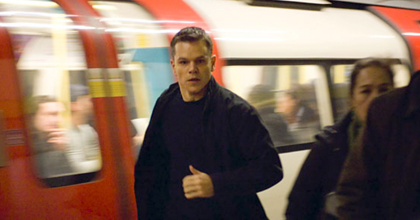 The saying that “good things come in threes” may not always be true for movie sequels, but it sure seems to be the case for Robert Ludlum’s Jason Bourne franchise. The Bourne Ultimatum is the third installment in this series and has hit the theaters to upbeat reviews. Matt Damon returns as Jason Bourne, a spy who’s had enough, but just can’t seem to quit in peace. Like the first two films, The Bourne Ultimatum promises to be a fast and furious ride from beginning to end.

I spoke with Christopher Rouse, the film’s editor, just a day after the official premiere and literally only a few days after the mix was completed. Rouse has been on board since The Bourne Identity (as have many of the cast and much of the crew), when he was brought on as one of the editors. In addition to the previous two Bourne films, Rouse also edited such suspenseful films as The Italian Job, Paycheck and United 93, for which he earned an Oscar nomination. All of these films are well-crafted pieces that really showcase the storytelling contribution of an editor.

The post schedule on this film was as much of a race to the finish as the movie itself. Rouse explained, “We started shooting last October and originally were supposed to be done with all photography by January, but we actually shot some pick-ups as late as June. Paul Greengrass [director] and Frank Marshall [producer] are very adamant that something shouldn’t just be good if it can be made better. So the script and the film’s structure were evolving all the way to the end. I started with the film at the beginning of principal photography and was headquartered in London. Paul wants to see cut material as early as possible so that he can address issues with coverage very quickly. As a result, I completed my first assembly about a week after the initial production was completed. Although it’s standard for a director to get an official ten weeks for a director’s cut, that didn’t happen in our case. We kept working and refining the film and were very fortunate that the studio trusted us.”

In January Rouse set up shop back in Los Angeles and continued to communicate daily with Greengrass long distance until he returned to California. All of the sound and editorial finishing was happening in Los Angeles, but the visual effects company, Double Negative, was in London. Chris continued, “It was quite a compressed schedule for a film of this size and complexity, so I literally haven’t had a day off in the last three months.” The workload and schedule pushed the team to add more edit systems and editors. Rouse explained, “I collaborated a lot with Paul on this film and spent less time actually pushing the buttons, so we brought on two co-editors, Mark Fitzgerald and Derek Brechin to help cut the scenes.”

I’m always curious how an editor chooses to shape the film he or she is working on and what hurdles they might run into. Rouse said, “The Bourne Ultimatum was never overly long from the start, so I didn’t have the challenge of a three-hour cut at the first assembly. Of course, the visual style and pacing were already well-established in the first two films, so I was cutting tight versions of the scenes on the first pass. I think this film really moves the entire time, but it has a nice balance. When the audience needs to take a breath so they can feel a scene resonate, we let that happen. Paul gives me the creative freedom to try things out that feel right to me. I can drop dialogue lines if they aren’t working and rearrange scenes if that makes the story better. As scripted, there’s a non-verbal scene of Jason Bourne arriving in Madrid, which is followed by a dialogue scene of the folks who are tracking him. Back-to-back these two pieces were fine, but not as interesting as they could have been. I found that it made the film more compelling to intercut the two scenes. We were constantly assessing structural issues. We knew that we had to keep certain scenes, as they were anchoring the story. Other scenes were much more in flux – some cuts we had them in, and then they’d be out in the next version – or sometimes in a different configuration. Keeping a scene or losing it can be a hard choice to make, because a scene’s presence, or lack thereof, has a domino effect on the entire film.”

Rouse uses large note cards tacked to the wall – a favored technique of many film editors. Each card shows a representative thumbnail image printed from that scene along with a description. This gives Rouse the “big picture” view of how the film is constructed and the ability to quickly rearrange scene order to judge how an alternate flow might affect the story. Sometimes he’ll use several walls to compare different versions.

“My assistants do a lot of the temp sound effects editing and dialogue clean-up on my scenes, but I’m very ‘hands on’ with music. I like to place it myself at an early stage. In this case, we had all the music from the other two films. Of course, as the film gets more and more rearranged, the music edits start to get more sloppy. So then I’ll bring in a music editor to clean this up and add some fresh ideas of their own.”

Chris Rouse edited The Bourne Ultimatum on Avid Media Composer Adrenalines connected to Unity shared storage. Rouse owns his own system, but by the end, a total of eight Media Composers were connected for the editors, assistants and visual effects editors. Orbit handled the Avid rental gear and LEM and Root 6 assisted with the London-based systems. 35mm film dailies were transferred to high definition video, but unlike other films, Rouse didn’t cut in high def. Chris explained, “I’ve cut films at Avid’s standard definition 14:1 resolution and I was really considering editing in HD, but then backed out at the last minute. We had considered loading in all the footage as both standard and high definition. I would have cut in standard and the HD would be conformed for screenings. Because the film kept changing, it was hard to keep up on the HD side, so we quickly dropped that idea. Instead, I edited at Avid’s 3:1 resolution, which uses a bit more storage, but looks far better than 14:1 when projected. The Bourne Ultimatum has a lot of night shots and even though it isn’t HD, this resolution was a great improvement. On the next film I’ll add a laptop system running a software version of Media Composer and consider using Avid’s new DNxHD36 compressed high definition codec.”

Even the “friends and family” screenings were presented straight out of the Avid at 3:1 instead of high definition. The Bourne Ultimatum didn’t go through any preview screenings – rare for a major studio release – and so was able to skip an HD conform. A few shots were printed and projected on film, but no dailies were printed and the movie wasn’t really seen at full quality until they reached the digital intermediate phase at Technicolor. Occasionally this can lead to some surprises. Chris added, “We did see a few soft shots, but this is really in keeping with Paul’s style and the general style and camera movement in the film. On some of the shots, we did see some crew members that weren’t visible to us in the Avid cut. Typically this would be someone’s shoulder in the corner of a shot. Since this was a DI, it was a simple matter to do a slight digital blow-up and fix the shot.”

Rouse is both an Avid editor and owner, so I asked if there were any special features, such as multi-cam or Script Editing, that help his cutting style. Chris explained, “Paul shoots with at least two cameras most of the time. I will have the assistants group the clips if it makes sense to do so, such as when you have two sync angles on the lead character. I don’t use the multi-cam mode necessarily, but by grouping them, I can quickly choose one angle or the other. I haven’t used the Script Editing feature. I know editors who swear by it, but I don’t really interact with the lined script like other editors. Once I start to cut the scenes together, I only occasionally go back to the script for reference. By then, the film takes on a life of its own. I’ve worked a little on Lightworks and Final Cut, but Avid feels the best to me for my style. It just seems to give me the quickest access to the material.”

“As an editor, I miss the communal exchange that used to be there when everyone screened dailies as a group,” Rouse said. “Now everyone gets their own DVD, so I’ll screen dailies with my assistants, but usually not with the crew. What you miss this way are some of the spontaneous reactions that came out of the group as they saw a shot for the first time. It was helpful to see and remember while you were editing. That process has changed, but we’ve adapted.”

As our conversation wound down, Chris departed his advice for new editors, “Remember that editing is a craft and you only get better at a craft by practicing it. It doesn’t matter what the material is or how good it is – just cut. You learn the most by editing material that’s not very strong and making it better. Taking something that is unwatchable and turning it into something entertaining is more challenging than getting the last bit of nuance out of great footage. The editing tricks I use today are things I learned twenty years ago when I wasn’t working on such great looking footage. That’s why Academy Award judging is particularly difficult. One never quite knows the quality of material the editor had to work with, and how far that material evolved in the cutting room. Visually bold films tend to get more attention, but a staid film can sometimes be the more difficult editing job.”

If the past films of Matt Damon, Paul Greengrass and Chris Rouse are any measure, The Bourne Ultimatum audience – not to mention students of the craft everywhere – are in for a great ride.