Boris FX is one of the most prolific producers of plug-in filters and compositing applications. Factor in all the host applications covered by the Boris products – like Boris Continuum Complete, plus the hosted and standalone versions of Boris Red, Blue, FX and Graffiti – and you can easily see how so much video is touched by this talented team of developers.

With so many products to offer, the company tends to concentrate on updating all the versions of one product over the course of a year. 2009 has been the time to refresh many of the filters and all of the NLE host versions of Boris Continuum Complete, now at version 6. Continuum is probably the most wide-ranging set of filter packages available, consisting of keyers, effects, generators, color-correction, 3D text and more.

If you purchase the retail version of Avid Media Composer, this will include the BCC filters as a bundled third-party product in the suite. After Effects and Final Cut users don’t get such a bundling deal from Adobe or Apple, but if you are going to shell out cash for a single comprehensive set of filters, then BCC is one of the best choices.

Naturally many editors don’t use all of the filters on a regular basis, so Boris FX has started to break out some of the individual filters into Boris Continuum Units. These are smaller sets of complementary filters that focus on one task. At this point, these include the Chromakey Studio and the 3D Objects unit. BC Units don’t cost as much as the full BCC package and let users purchase only the one or two filter sets that they feel might be the most useful to their workflow.

Each host application uses a different plug-in API, so BCC6 comes in versions that are specific to individual NLE and compositing application. This lets Boris FX customize the features according to the API and allows them the ability to add some functions, like geometry controls and deep color rendering that might not be part of the host’s internal effects controls. I work with BCC6 is various flavors: AVX, FxPlug and After Effects. Each of these filter packs is generally the same, though there are variations particular to one host or the other. The big new features in BCC6 include 3D objects, like extruded splines and text, more chroma-keying tools, more real-time and OpenGL acceleration, support for After Effects’ camera and lighting system and keyframe animation exchange between the AE and AVX versions of BCC6.

Overall, BCC6 filters work well in all of these hosts (FCP, Media Composer, Motion and After Effects CS4). You can quickly see how certain filters, like 3D animated and shaded text, particles and layer deformation, can be used in very creative ways to greatly enhance your favorite application. This is especially true in Avid Media Composer, which has one of the weakest and oldest effects modules of any of these applications.

The most updated approach can be found in the FxPlug version. This API offers a number of options to the developer, but of course, it’s Mac only. For example, BCC6 FxPlug includes several filter categories labeled BCS filters for Boris Continuum Shaders. According to Boris Yamnitsky (yes, the Boris of Boris FX), “The name Shaders stems from the implementation method for all filters in that subset of Boris Continuum. The software algorithms have been re-written in a special shader language for the GPU under FxPlug architecture. For example, the Chroma Key algorithm is roughly the same, but the new filter is dramatically faster than the software counterpart. In addition, the choke and light-wrap stages are added at no render cost. The three software filters stacked up on a clip will certainly require longer rendering while the GPU version easily plays back in RT mode. Same for Film Look and all other BCS filters. What’s even more interesting is that multiple BCS filters can be stacked up without the multi-filter penalty so common with software based filters.”

These specific filters enable a new, interactive preset browser that previews your video clip – not a default dummy clip – with the presets applied. You can interactively select and refine the choices simply by clicking through the presets in the browser window. Right now this feels like a bit of a work-in-progress to me. For example, only the filters that apply a visual effect – like the Film Effect – actually have presets that show up on the browser. It won’t display any presets from the Chromakey or 3D Perspective filter. The browser’s custom UI also acted flakey inside Motion, which doesn’t come as a surprise to me. Motion can be very powerful, but often disappoints and acts like a toy and not a robust software tool.

BCS Chromakey Studio is an example of a BC Units pack that’s part of BCC6 FxPlug. This combines the Chromakey, Matte Choker and Light Wrap filters into one module. The quality of the key was pretty good, but I couldn’t get Matte Choker to work correctly in either FCP or Motion. No matter where I adjusted the Choke slider, it was simply at one extreme or the other. By comparison, when I applied each of these filters individually, things worked as I would expect.

Light wrap is interesting, as it uses a color or the background image and blends it into the edge of the foreground object. It’s trying to simulate how light in a real shot tends to diffuse edges and “bend around” an object in a camera lens. Boris FX’s chromakeying is on par with other better keyers and gives very good results on clips that are easy to key. I wasn’t as happy with it on a more difficult-to-key test clip that I use. In general, the BCC keying filters gave me results close to Avid’s Spectramatte, but not as good as Keylight, which is included with After Effects CS4.

3D text is a big deal in the BCC6 update and something that’s not often found in competing filter packages. You can import EPS files or generate text using the familiar Boris text tool. Next, apply presets for style and animation. This filter is built on the Boris Blue 3D engine, so text stays vector-based, complete with material and lighting attributes. 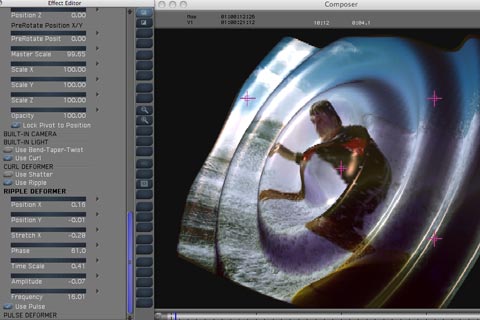 These same 3D object characteristics are also applied in the Layer Deformation tool. If you’re old enough to recall Sony’s VERY expensive System G hardware DVE that could ripple and warp video in real-time in 3D space, then you get some idea of the power this single filter is delivering to the desktop. 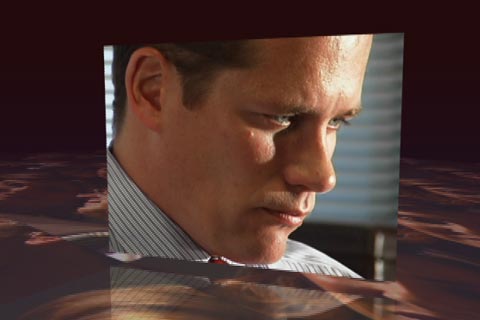 Another BCS filter offered in the FxPlug version is 3D Perspective. This filter combines a number of Boris’ 3D filters and Apple Core Image technology to composite several elements using a single filter. In this particular effect, live video – complete with lighting and reflections – is placed on a floor surface. Preset animation moves control the camera move towards the video. You can change many of the attributes including the floor surface. The default is a checkerboard pattern, but simply drop other moving video or a still image into an image well for two layers of moving video – all within the same filter.

I feel that the BCC6 filters typically behave best in After Effects. The application feels snappier than any of the others, especially when scrubbing through a clip once filters are applied to it. After Effects momentarily degrades the video during scrubbing and then pops back to full quality (or the setting you’ve selected) as you stop. This delivers a more responsive experience. After Effects simply blows away Motion, Final Cut or Media Composer for serious compositing. Equipped with BCC6, it’s one kicking desktop compositing tool! 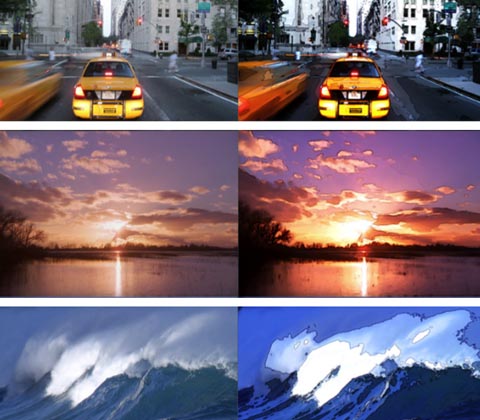 Unfortunately the After Effects implementation lacks an FxPlug-style preset browser and the BCS effects. Nearly all of the filters are actually there in the various categories – just no interactive browser. Nevertheless, if you want to know how an effect works, simply click the “help” button to open a PDF user guide for instructions.

Since I’m wrapping up by talking about After Effects, lets not forget Final Effects Complete. This vintage filter set introduced advanced image effects, like 3D shatters, cylinders and spheres, to the desktop world during the early days of After Effects. It’s bounced around a bit, but has been firmly in the Boris FX product family for several years, who has kept it current. FEC works with a number of hosts, including Final Cut Pro and After Effects CS4. When you want to pull out some funky effects for the client, it’s hard to beat filters like Hair or Mr. Mercury! Modern desktop machines and even laptops plough through these effects with ease, so there isn’t the performance burden we’ve known in the past. If you’re interested in both BCC and FEC, remember that Boris offers a number of bundling deals that make this combo quite attractive.