Adobe has been on a roll getting filmmakers to adopt its Premiere Pro CC editing software for feature film post. Hot on the heels of its success at Sundance, where a significant number of the indie films we’re edited using Premiere Pro, February saw the release of two major Hollywood films that were cut using Premiere Pro – the Coen Brothers’ Hail, Caesar! and Tim Miller’s Deadpool.

Deadpool is one of Marvel Comics’ more unconventional superheroes. Deadpool, the film, is the origin story of how Wade Wilson (Ryan Reynolds) becomes Deadpool. He’s a mercenary soldier that gains accelerated healing powers through a rogue experiment. Left disfigured, but with new powers, he sets off to rescue his girlfriend (Morena Baccarin) and find the person responsible. Throughout all of this, the film is peppered with Deadpool’s wise-cracking and breaking the fourth wall by addressing the audience.

This is the first feature film for director Tim Miller, but he’s certainly not new to the process. Miller and his company Blur Studios are known for their visual effects work on commercials, shorts, and features, including Scott Pilgrim vs. the World and Thor: The Dark World. Setting out to bring as much of the post in-house, Miller consulted with his friend, director David Fincher, who recommended the Adobe Creative Cloud solution, based on Fincher’s experience during Gone Girl. Several editing bays were established within Blur’s facility – using new, tricked out Mac Pros connected to an Open Drives Velocity SSD 180TB shared storage solution. 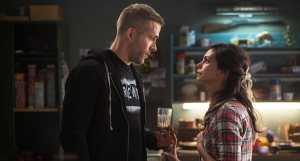 Julian Clarke (Chappie, Elysium, District 9) came on board to edit the film. He explains, “I talked with Tim and was interested in the whole pioneering aspect of it. The set-up costs to make these permanent edit suites for his studio are attractive. I learned editing using [Apple] Final Cut Pro at version one and then I switched to Avid about four years later and have cut with it since. If you can learn [Avid] Media Composer, then [Adobe] Premiere Pro is fine. I was up to about 80% of my normal speed after just two days.”

To ease any growing pains of using a new editing tool on such a complex film, Miller and Adobe also brought in feature film editor Vashi Nedomansky (That Which I Love Destroys Me, Sharknado 2: The Second One, An American Carol) as a workflow consultant. Nedomansky’s job was to help establish a workflow pipeline and to get the editorial team up to speed with Premiere Pro. He had performed a similar role on Gone Girl. He says, “I’ve cut nine features and the last four have been using Premiere Pro. Adobe has called on me for that editor-to-editor interface and to help Blur set up five edit bays. I translated what we figured out with Gone Girl, but adapted it to Blur’s needs, as well as taking into consideration the updates made to the software since then. During the first few weeks of shooting, I worked with Julian and the assistant editors to customize their window layouts and keyboard shortcuts, since prior to this, the whole crew had primarily been using Avid.”

Staying up with production 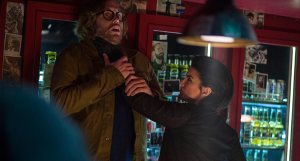 As with most features, Clarke was cutting while the production was going on. However, unlike many films, he was ready to show Miller edited scenes to review within 24 hours after the shoot had wrapped for the day. Not only a cut scene, but one already fleshed out with temporary sound effects and music. This is quite a feat, considering that Miller shot more than 500 hours of footage. Seeing a quick turnaround of edited scenes was very beneficial for Miller as a first-time feature director. Clarke adds, “My normal approach is to start cutting and see what works as a first draft. The assistant will add sound effects and temp music and if we hit a stumbling block, we move on to another scene. Blur had also created a lot of pre-vis shots for the effects scenes prior to the start of principal photography. I was able to cut these in as temp VFX. This way the scenes could play through without a lot of holes.” 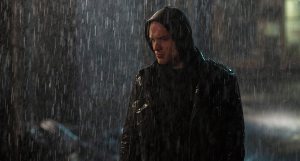 To make their collaborative workflow function, Nedomansky, Clarke, and the assistants worked out a structure for organizing files and Premiere Pro projects. Deadpool was broken into six reels, based on the approximate page count in the script where a reel break should occur. Every editor had their own folder on the Open Drives SAN containing only the most recent version of whatever project that they were working on. If Julian Clarke was done working on Reel 1, then that project file could be closed and moved from Clarke’s folder into the folder of one of the assistants. They would then open the project to add temporary sound effects or create some temporary visual effects. Meanwhile, Clarke would continue on Reel 2, which was located in his folder. By keeping only the active project file in the various folders and moving projects among editors’ folders, it would mimic the bin-locking method used in shared Avid workflows.

In addition, Premiere Pro’s Media Browser module would also enable the editors to access and import sequences found within other project files. This is a non-destructive process. Older versions of the project files would be stored in a separate folder on the SAN in order to keep the active folders and projects uncluttered. Premiere Pro’s ability to work with folders as they were created in the Finder, let the editors do more of the organization at the Finder level than they normally would, had they been cutting with Avid systems.

Regardless of the software you use, each film presents a unique set of creative challenges. Clarke explains, “One scene that took a while was a long dialogue scene with Deadpool and Colossus on the highway. It’s quintessential Deadpool with a lot of banter and improv from Ryan. There’s not much story going on in the background at that time. We didn’t want to cut too much out, but at the same time we didn’t want to have the audience get lost in what’s supposed to be the bigger story. It took some time to strike the right balance. Overall the film was just about right. The director’s cut was about two hours, which was cut into the final length of one hour and 45 minutes. That’s just about the right amount to cut out, because you don’t end up loosing so much of the heart of the film.”

Many editors have a particular way they like their assistants to organize bins and projects. Clarke offers, “I tend to work in the frame view and organize my set-ups by masters, close-ups, and so on. Where I may be a little different than other editors is how I have my assistants organize action scenes. I’ll have them break down the choreography move-by-move and build a sequence of selected shots in the order of these moves. So for example, all the angles of the first punch, followed by all the angles of the next move – a punch, or block, or kick. Action scenes are often shot with so much coverage, that this lets me quickly zero in on the best stuff. It eliminates the scavenger hunt to find just the right angle on a move.” 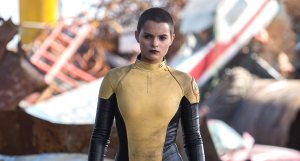 The script was written to work in a nonlinear order. Clarke explains how that played out through the edit, “We stood by this intention in the editing. We found, in fact, that the film just didn’t work linearly at all. The tone of the two [scripted] timelines are quite different, with the more serious undertones of the origin story and the broad humor of the Deadpool timeline. When played sequentially, it was like oil and water – two totally different movies. By interweaving the timelines, the tone of the movie felt more coherent with the added bonus of being able to front load action into the movie to excite the audience, before getting into the heavier cancer part of the story.”

One editing option that might come to mind is that a character in a mask offers an interesting opportunity to change dialogue without difficult sync issues. However it wasn’t the sort of crutch some might assume. Clarke says, “Yes, the mask provided a lot of opportunity for ADR. Though this was used more for tweaking dialogue for plot clarity or to try out alternate jokes, than a wholesale replacement of the production track. If we liked the production performance we generally kept it, and embraced the fact that the mask Ryan was wearing would dull the audio a bit. I try to use as little ADR as possible, when it comes to it being used for technical reasons, rather than creative ones. I feel like there’s a magic that happens on set that is often hard to replicate in the ADR booth.”

The editing systems proved to offer the performance needed to complete a film of this size and complexity. Vashi Nedomansky says, “There were 1400 effects shots handled by ten vendors. Thanks to the fact that Blur tricked out the bays, the editors could push 10 to 15 layers of 2K media at a time for temp effects – in real-time without rendering. When the film was locked, audio was exported as AAF for the sound facility along with an H.264 picture reference. Blur did many of the visual effects in-house. For final picture deliverables, we exported an XML from Premiere Pro, but also used the Change List tool from Intelligent Assistance. This was mainly to supply the list in a column format that would match Avid’s output to meet the studio’s requirements.”

I asked Clarke and Nedomansky what the team liked best about working with the Adobe solution. Nedomansky says, “I found that the editors really liked the tilde key [on the keyboard], which in Premiere Pro brings any window to fullscreen. When you have a timeline with 24 to 36 tracks of temp sound effects, it’s really nice to be able to make that fullscreen so that you can fine-tune them. They also liked what I call the ‘pancake timeline’. This is where you can stack two timelines over each other to compare or pull clips from one into the other. When you can work faster like this, there’s more time for creativity.” Clarke adds, “I used a lot of the time-remapping in After Effects. Premiere Pro’s sub-frame audio editing is really good for dialogue. When Avid and Apple were competing with Media Composer and Final Cut Pro it was very productive for both companies. So competition between Avid and Adobe is good, because Premiere Pro is very forward-thinking.”

Many NLE users may question how feature films apply to the work they do. Nedomansky explains, “When Kirk Baxter used Premiere Pro for Fincher’s Gone Girl, the team requested many features that they were used to from Final Cut Pro 7. About 200 of those suggestions have found their way as features into the current release that all Creative Cloud customers receive. Film editors will stress a system in ways that others won’t, and that information benefits all users. The important takeaway from the Deadpool experience is that after some initial adjustment, there were no showstoppers and no chaos. Deadpool is a monster film, but these are just tools. It’s the human in the chair making the decision. We all just want to work and not deal with technical issues. Whatever makes the computer invisible – that’s the power.”

Deadpool is certainly a fun rid, with a lot of inside jokes for veteran Marvel fans. Look for the Stan Lee cameo and be sure to stay all the way through the end credits!