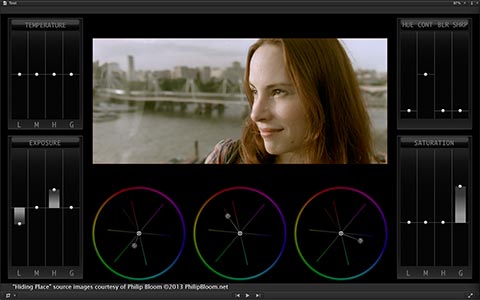 Color correction using graphical color wheels was introduced to the editing world in the Avid Symphony over a decade ago and adopted by nearly every NLE after that.  Final Cut Pro “legacy” had a two nice color correctors using the color wheel model, so adopters of Final Cut Pro X were disappointed to see the Color Board as the replacement. Although the additive/subtractive color math works about the same way to change tonality of lows, mids and highlights, many users still pine for wheels instead of pucks and sliders. A pair of developers (Tokyo Productions and Lawn Road) set out to rectify that situation with Hawaiki Color. It’s the color correction tool that many Final Cut Pro X editors wish Apple had built. (Click any images in this post for an enlarged view.)

Both developers offer several different types of grading filters, which all perform similar tasks. Each has its own twists, but only Hawaiki Color includes on-screen sliders and color wheel controls. Based on how Apple designed FCP X, developers simply cannot create custom interfaces within the Inspector effects panel. They are limited to sliders and a few extras. One of these extras is to the ability to tap into the Mac OS color pickers to use color swatches as tonal controls for low/mid/hi color balance. A number of grading filters use this method quite successfully.

If a developer wants to introduce more custom interface elements, then there are two routes – linking to a separate external application (Magic Bullet Looks, Digital Film Tools Film Stocks, Tiffen Dfx3, GenArts Sapphire Edge) – or placing an overlay onto the Viewer. Thanks to the latter option, a number of developers have created special overlays that become “heads up display” (HUD) controls for their plug-ins. To date, only Hawaiki Color and Yanobox Moods have used a HUD overlay to reproduce color wheels for grading.

The Hawaiki Color grading controls can be adjusted either from the Inspector effects pane or from the on-screen HUD controls placed over the main Viewer output. Set-ups, like a reference split screen, must be done from the Inspector. The grading controls are built into three of the four frame corners with low/mid/hi/global sliders for exposure, temperature and saturation. The sliders in the fourth corner let you adjust overall hue, contrast, sharpening and blur. At the center bottom of the frame are three color wheels (low/mid/hi) for balance offsets. Once the Hawaiki Color filter is applied to the desired clips in your timeline – and you have set the filter to be displayed in a window or full screen with overlaid controls – it becomes very easy to move from clip-to-clip in a very fast grading session. 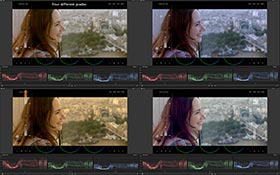 I ran a test using Philip Bloom’s Hiding Place short film, which he shot as part of his review of the Blackmagic Pocket Cinema Camera. He was gracious enough to offer an ungraded ProResHQ version for download, which is what I used as my test footage. The camera settings include a flat gamma profile (BMD Film), which is similar to RED’s RedLogFilm or ARRI’s Log-C and is ideal for grading. I edited this into an FCP X timeline, bladed the clip at all the cuts and then applied the Hawaiki Color filter to each segment. 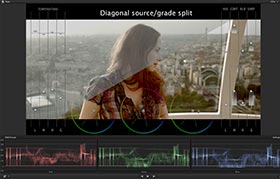 By running my Viewer on the secondary screen, setting the filter to full screen with the interface controls overlaid and placing the FCP X scopes below, I ended up with a very nice color grading environment and workflow.  The unique aspect, compared to most other grading filters, is that all adjustments occur right on the image. This means your attention always stays on the image, without needing to shift between the Inspector and the Viewer or an external monitor. I did my grading using a single instance of the filter, but it is possible to stack more than one application of Hawaiki Color onto a clip or within adjustment layers. You can also use it in conjunction with any other filter. In fact, in my final version, I added just a touch of the FilmConvert Pro film emulsion filter, as well as an FCP X Color Board shape mask for a vignette effect.

There are a few things to be mindful of. Because of the limitations developers face in creating HUDs for an FCP X effect, Hawaiki Color includes a “commit grade” button, which turns off the on-screen interface. If you don’t “commit” the grade, then the interface is baked into your rendered file and/or your exported master. Like all third-party filters, Hawaiki Color does not have the same unrendered performance as FCP X’s own Color Board. There’s “secret sauce” that Apple uses, which developers are not privy to. Frankly, there isn’t a single third-party FCP X filter that performs as well as Apple’s built-in effects. Nevertheless, Hawaiki Color performed reasonably well in real-time and didn’t get sluggish until I stacked FilmConvert and a vignette on top of it. 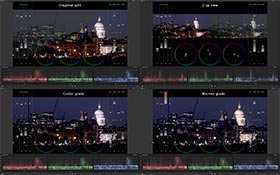 I ran into an issue with Bloom’s source file, which he exports at a cropped 1920 x 816 size for a 2.40:1 aspect ratio. FCP X will fit this into a 1920 x 1080 sequence with letterboxed black pad on the top and bottom. However, by doing this, I found out that it affected the HUD controls, once I added more filters. It also caused the color wheel controls to change possible in the frame, as they are locked to the source size. The solution to avoid such issues is to place the non-standard-sized clip into a 1080p sequence and then create a Compound Clip. Now edit your Compound Clip to a new sequence where you will apply the filters. None of this is an issue with Hawaiki Color or any other filter, but rather a function of working with non-standard (for video) frame sizes within an FCP X sequence. 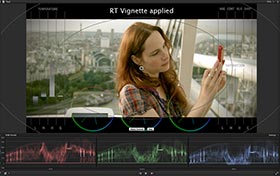 As far as grading Hiding Place, my intent was to go for a slight retro look, like 1970s era film. The footage lent itself to that and with the BMD Film gamma profile was easy to grade. I stretched exposure/contrast, increased saturation and swung the hue offsets as follows – shadows towards green, midrange towards red/orange and highlights towards blue. The FilmConvert Pro filter was set to a Canon Mark II/Standard camera profile and the KD5207 Vis3 film stock selection. This is a preset that mimics a modern Kodak negative stock with relatively neutral color. I dialed it back to 30% of its color effect, but with grain at 100% (35mm size). The effect of this was to slightly change gamma and brightness and to add grain. Finally, the Color Board vignette darkens the edges of the frame.

Click here to see my version of Hiding Place graded using Hawaiki Color. In my clip, you’ll see the final result (first half), followed by a split screen output with the interface baked in. Although I’ve been a fan of the Color Board, I really like the results I got from Hawaiki Color. Control granularity is better than the Color Board and working the wheels is simply second nature. Absolutely a bargain if it fits your grading comfort zone!