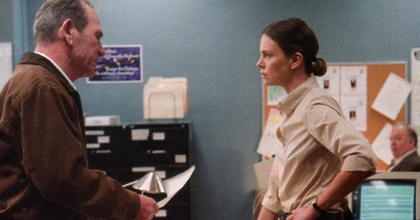 Every war spawns stories and films about that effort, as we try to make sense of the incomprehensible and the affect it has on those directly and indirectly involved. In the Valley of Elah is one of what will undoubtedly be many films stemming from our involvement in the war in Iraq. This is the second feature film outing as a writer/director for Paul Haggis, coming on the heels of the Oscar-wining Crash, which Haggis also directed and co-wrote. Haggis adapted his screenplay from a Playboy magazine article by Mark Boal, called Death and Dishonor, as a portrayal of Hank Deerfield (Tommy Lee Jones) – a grieving father looking for the truth of his son’s disappearance.

In the Valley of Elah is a murder-mystery framed by our involvement in Iraq. The title itself refers to the Old Testament location of the battle between David and Goliath, which serves as a metaphor for Deerfield’s conflicts. One underlying theme that Haggis tries to tackle is what happens on a personal level to the men and women asked to do physically and emotionally scarring things on behalf of our country. Deerfield is a retired military policeman who learns that his son Mike (Jonathan Tucker) has gone AWOL after returning from active duty in Iraq. During his own investigation into the facts, Deerfield comes to realize that the official military story isn’t the complete truth but that the real story may be harder to accept. As he struggles to learn the facts, Deerfield is eventually aided by Emily Sanders (Charlize Theron), a small town detective and single mother.

Jo Francis, who came to this project from the world of episodic series television, edited In the Valley of Elah. It just so happens that Francis is also Haggis’ sister, which seemed like a good starting point for my interview. Francis said, “I had been working on House and went on to edit the pilot for The Black Donnellys, which was Paul’s show. We realized that even though we were brother and sister, the collaboration was very good. So when the opportunity to do this film came along, I begged Paul to let me have a crack at it and it really turned out to be a great experience. Fortunately, we can keep family separate, so it’s a very professional and productive director-editor relationship.” Both come from the TV world, where Paul Haggis was involved in such shows as thirtysomething, Walker Texas Ranger and Family Law. According to Francis, this has its advantages. “Television is a great training ground for features. There’s always a time crunch, so you learn to work fast and find the best creative solutions in a very short time frame. By comparison, features are a much more relaxed pace and you can concentrate on a single project, instead of always having to think ahead to the next episode.”

Production on In the Valley of Elah started early December of last year in Albuquerque, New Mexico, where Francis joined the team on location. The film was shot on 35mm by director of photography Roger Deakins and transferred to HD. Even so, it was ingested into the Avid Media Composer Adrenaline editing system at the compressed 14:1 standard definition resolution. Francis explained, “We had Adrenalines and Unity shared storage, but didn’t want to capture the footage as HD. When you are working with a lot of footage, even at compressed HD resolutions, the systems start to get a bit clunky and slow. Things are just more responsive when you are working in standard definition at the rough cut stage of post.” This film was a somewhat standard production affair – shot largely in a single-camera film style. Not many multi-camera set-ups and only a bit of crane, dolly and Steadicam work.

Jo Francis completed her first assembly by mid-February in Albuquerque. The project next shifted to New York where she worked with Haggis on the director’s cut. This was concluded by the end of May. Finally, post was wrapped up in Los Angeles, with Francis working up until September addressing studio notes and getting the picture locked. Many complex, modern films may have more than one editor, but Francis tackled this alone, with a single local assistant editor in each of the three cities. Francis pointed out that then it becomes fun for the editor. “When the picture is finally locked, you can relax a bit and enjoy the creativity of others. A lot of the pressure is off and that’s when it becomes fun for the editor. Now it’s in the hands of the sound department, music and DI. You help and add input to all of these areas as the editor, but it’s enjoyable to see the contributions added by others on the team.”

The first assembly of In the Valley of Elah clocked in at three hours, but by the time the cut was locked, the movie ran two hours. We discussed what it took to get there. Francis said, “When I first read the script, the story felt very linear to me and I didn’t think we would be able to rearrange a lot of scenes. As we got into it, though, I was surprised that the material actually lent itself rather well to being moved around as much as we did. Of course, for that sort of time reduction, you can’t avoid dropping things. A lot of trims were made in the beginning and end of the film. For example, we felt that we needed to get the Tommy Lee Jones character on his journey more quickly, so parts were cut out to speed the story along at the start. We cut other scenes that would have given us too many endings, had they stayed. One big scene that was cut out was an elaborate sequence in which we had turned the person into an amputee through visual effects. When Paul looked at it in context, he felt that this told the whole story in a single scene and he would rather have it be revealed over the timeline of the film. So we decided to lose it entirely.”

Like other editors, Jo Francis used story cards to help organize the cut. She continued, “There were 213 scenes in the script and cards helped us stay organized. I typically use printed note cards and picture reference cards that I place on the wall. When you move scenes around a lot, this gives you a quick bird’s eye view of the story structure.” Paul Haggis is known for a writing style that interleaves the lives of various characters, such as in his screenplay for Crash. In this case, the storyline was more straightforward. According to Jo, “This wasn’t an ensemble cast, like in Crash. The story primarily focuses on Tommy Lee Jones and Charlize Theron. As we explore the emotional relationship between Jones’ character and his son, the film also plays on the relationship between Theron’s character and her own son. It also looks at the boys who committed the crime and what would have brought them to do that.”

The Editor’s Bag of Tricks

Modern editing software offers a toolset that extends the creativity of contemporary feature film editors. Jo Francis cuts on an Avid, so I asked her to share why the system makes the most sense for her. “I’ve always cut on Avids, so I really haven’t felt the need to use anything else. I know other editors like Final Cut, but once Avid Xpress Pro came along, I was able to use Avid’s comprehensive tools in an affordable and portable package. It’s become pretty commonplace in the last couple of years for an editor to take a laptop edit system with the media on a set of FireWire drives home or to the mix stage. In my case, I do that with Xpress Pro. I had it with me during the mix, so that I was able to double-check things. If anything was in question, I could easily call up my cut and see what was intended. As far as Avid’s tools, I use Animatte quite a bit. For example, I’ll routinely combine performances between two different takes and use Animatte to place someone’s head into another take. Or, I’ll use it to remove a boom from a shot. This will get redone as part of the digital intermediate, anyway, but that sort of thing is no longer a costly optical film effect. I also like to use the Locators a lot. I’ll place these on points in the timeline and add written descriptions to the Locators so I can easily find something.”

Francis works as much with the sound as the picture during her cut. Francis said, “More directors and studios expect that the rough cut coming out of the Avid has almost the look of a finished movie. So I make sure to replace audio with other takes or with the isolated tracks when that sounds better. I’ll do a lot of temp sound effects work and build up a temp score. On In the Valley of Elah, we used temp music from other films to get the right feel. Mark Isham (Crash) was our composer and his past films didn’t have scores that really worked for this film, so we didn’t end up using a lot of his past work as temp music. Any way, he wanted his own fresh take on the film.” In my own experience, I’ve seen when you can get too attached to some of the temp music cuts and I wondered if this had happened to Jo. She replied, “We actually had used a popular music track, but in the end were unable to license it. It turned out OK, though, because Mark was able to score a cue that had a similar feel and really worked far better than we had hoped.”

With In the Valley of Elah in the theaters, Jo Francis is taking a well-earned break before moving on to the next assignment. It’s not back to television, though. “I really like working in features. It’s a lot of fun and somewhat relaxed compared to series work, so I’m definitely moving on to another feature!” Maybe the next project will also stay in the family.