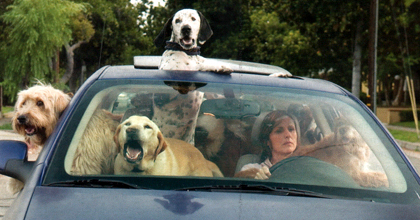 Any movie fan that enjoyed the brain-teasing ride of Chris Nolan’s Memento or the spectacle of Ridley Scott’s Kingdom of Heaven has seen Dody Dorn’s editing handiwork.  Dorn’s latest effort, Year of the Dog is making its debut at Sundance.  Described as a quirky comedy starring Saturday Night Live alum Molly Shannon, Year of the Dog couples Dorn with first-time director and writer Mike White (Nacho Libre, The School of Rock, The Good Girl).  Dody Dorn explained the movie to me this way, “IMDB describes the plot outline as, ‘A secretary’s life changes in unexpected ways after her dog dies.’ but really, it’s hard to describe a film like this without giving it away.  Molly Shannon delivers a very nuanced performance in a humorous, thought-provoking and emotional film.  Viewers should discover what this film is for themselves, because it’s far subtler than you would expect from her previous roles or the films that Mike White has written as of late.”

Although considered a low budget film, Year of the Dog is a studio project that will be released by Paramount Vantage in April.  As a studio film there are still certain minimum expectations. According to Dorn, “We had three Mac Avid Media Composer Adrenaline systems networked with shared storage.  This might seem like a luxury compared with other low budget films, but studios have certain expectations throughout the editing process.  This all takes time and it can best be done if you have enough systems to allow the editor and assistants to be able to access the same media.”

Year of the Dog was shot on 35mm film and then telecined to Digital Betacam and delivered to the editing team on FireWire drives, Digibeta and DVCAM.  Dorn continued, “We are going to cut negative instead of doing a digital intermediate.  Due to the budget limitations, there were no film dailies.  One downside to going this way is that you never really see what the negative looks like until the end.   Color correction in telecine is such a different process from color timing on film.  In our telecined dailies, we had a case where Molly’s sweater was green in one scene and pink in another.  We thought it was a continuity error.  We were actually prepared to fix this with a visual effect.  Imagine how pleasantly surprised we were when the effects house examined the negative and discovered that the sweater was already pink in every shot.  It turned out that this was simply an error in the video transfer of the dailies.”  Dorn was on board from the start of production, which began in June and proceeded for eight weeks.  Total post was about seven months – an average length of post time for a dialogue driven feature film, but very short compared to the fifteen months she spent on Kingdom of Heaven.

Comparing notes on the length of time it takes to cut a feature, Dorn pointed out that a film takes time to find itself.  “Each film is different and it takes time to shape a film.  On Year of the Dog I was on from the beginning of shooting.  My approach during production is different from post.  During the production phase, it’s my job to make sure we have the necessary coverage to tell the story and to communicate with the director how the material is coming together.   Sometimes in dailies a scene might not immediately reveal itself to me.  Then when I cut it, I rediscover the alchemy of the editing process.  I might hate something in dailies, but love it in the cut.  I like to shape the edit and see the film come together using the gems from all the takes.  I stay away from the set so I can be an objective viewer and see the film the way an audience sees it.   In Year of the Dog, Mike White gave me about two weeks of space after production wrapped to shape the film, before starting to work together on the director’s cut.  I really appreciated that.  We showed a cut to the studio about ten weeks after we wrapped shooting.  We knew that the script would run long, but Mike wanted a movie where it felt as if you were stepping into the middle of a scene rather than seeing it from the beginning.  In order to get that, he wrote and shot much more dialogue than he intended to use.  We worked together to pare the material down to the heart of the scene.  I love working with Mike because he’s so open to the collaborative process.”

Dody Dorn has edited on Avid nonlinear systems since their beginning.  “I started cutting on film, but then transitioned early to Avid systems.  I cut differently on nonlinear systems than on film.  Because I don’t have to worry about messing up the workprint, I can quickly put together a scene or multiple versions of a scene.  Sometimes there are happy accidents that come out of slamming shots and scenes together.  Nonlinear being nondestructive lets you experiment in ways that you might not do otherwise.  I like to give scenes to my assistants and they can be as radical and experimental as they want.  I enjoy working with assistants who have opinions and want to edit.  We can talk about the film as it’s coming together during production and it often leads to new perspectives.”

Many editors have favorite ways to structure the material, so I wondered if Dody Dorn used any of her own editorial aids or tricks on Year of the Dog?  “This is the first film I didn’t use note cards pinned to the wall.  The chronology of the film was very domino-like, one scene and it’s consequences leading to the other, so we weren’t inclined to rearrange many of the scenes.  If I do use cards, it’s a good way to see at a glance the sweep of the film’s structure and to experiment with changing the order of the scenes.  When I drop a scene, I turn the card upside down, so then I am reminded the scene exists and sometimes those scenes go back in.   Also, nowadays, I use the effects palette on the Avid as an editorial tool.  For example, I’ll do a split screen on a shot, like an over-the-shoulder with two actors.  I can combine two portions of a take to get better timing to the action between the actors.  It has to be recreated for the cut negative as a digital optical, but it is a way to better tell the story or keep the continuity flowing smoothly.”

With a filmography that ranges from thrillers to action films to comedies, not to mention such A-list directors as Ridley Scott, Chris Nolan and Jim Cameron, Dody Dorn was pretty philosophical about her contribution to these films. “My job as an editor is to be in a creative partnership with a director to get his or her vision onto the screen.  I feel privileged to be able to spend hours, days, weeks and months in dark rooms with such creative people.  I love that I am able to be a part of such an exciting process, and yet I can still relax in a theater and enjoy the film along with the rest of the audience.  That’s the magic of filmmaking!”