Monday saw Apple’s first virtual WWDC keynote presentation. This was a concise, detail-packed 108 minute webcast covering the range of operating system changes affecting all of Apple’s product lines. I shared my initial thoughts and reactions here and here. If you want some in-depth info, then John Gruber’s follow-up interview with Craig Federighi and Greg Joswiak of Apple is a good place to start. With the dust settling, I see three key takeaways from WWDC for Mac users.

Apple Silicon becomes the third processor transition for the Mac. Apple has been using Intel CPUs for 15 years. This shift moves Mac computers to the same CPU family as the mobile platforms. The new CPUs are based on Arm SoC (system on chip) technology. Arm originally stood for Acorn RISC Machine and is a technology developed by Arm Holdings PLC. They license the technology to other companies who are then free to develop their own chip designs. As far as we know, the Apple Arm chips will be manufactured in foundries owned by TSMC in Taiwan. While any hardware shift can be disconcerting, the good news is that Apple already has more than a decade-long track record with these chips, thanks to the iPhone and iPad. (Click here for more details on RISC versus CISC chip architectures.)

macOS software demos were ostensibly shown on a Mac with 16GB RAM and operating on an A12Z Bionic chip – the same CPU as in the current iPad Pro. That’s an 8-core, 64-bit processor with an integrated GPU. It also includes cores for the Neural Engine, which Apple uses for machine learning functions. 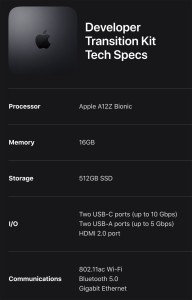 Apple is making available a developer transition kit (DTK) that includes a Mac mini in this configuration. This would imply that was the type of machine used for the keynote demo. It’s hard to know if that was really the case. Nevertheless, performance appeared good – notably with Final Cut Pro X showing three streams of 4K ProRes at full resolution. Not earth-shattering, but decent if that is actually the level of machine that was used. Federighi clarified in the Gruber interview that this DTK is only to get developers comfortable with the new chip, as well as the new OS version. It is not intended to represent a machine that is even close to what will eventually be shipped. Nor will the first shipping Apple Silicon chips in Macs be A12Z CPUs.

The reason to shift to Arm-based CPUs is the promise of better performance with a lower power consumption. Lower power also means less heat, which is great for phones and tablets. That’s also great for laptops, but less critical on desktop computers. This means overclocking is also a viable option. According to Apple, the transition to Apple Silicon will take two years. Presumably that means by the end of two years, all new Macs released going forward will use Arm-based CPUs.

Aside from the CPU itself, what about Thunderbolt and the GPU? The A12Z has an integrated graphics unit, just like the Intel chip. However, for horsepower Apple has been using AMD – and in years past, NVIDIA. Will the relationship with AMD continue or will Apple Silicon also cover the extra graphics grunt? Thunderbolt is technology licensed by Intel. Will that continue and will Apple be able to integrate Thunderbolt into its new Macs? The developer Mac mini does not include Thunderbolt 3 ports. Can we expect some type of new i/o format in these upcoming Macs, like USB 4, for example? (Click here for another concise hardware overview.)

The second major reveal (for Mac users) was the next macOS after Catalina – Big Sur. This is the first OS designed natively for Arm-based Macs, but is coded to be compatible with Intel, too. It will also be out by the end of the year. Big Sur is listed as OS version 11.0, thus dropping the OS X (ten) product branding. A list of compatible Macs has been posted by Apple and quite a few users are already running a beta version of Big Sur on their current Intel Macs. According to anecdotes I’ve seen and heard, most indicate that it’s stable and the majority of applications (not all) work just fine.

Apple has navigated such transitions before – particularly from PowerPC to Intel. (The PowerPC used a RISC architecture.) They are making developer tools available (Universal 2) that will allow software companies to compile apps that run natively on both Intel and/or Arm platforms. In addition, Big Sur will include Rosetta 2, a technology designed to run Intel apps under native emulation. In some cases, Apple says that Rosetta 2 will actually convert some apps into native versions upon installation. Boot Camp appears to be gone, but virtualization of Linux was mentioned. This makes sense because some Linux distributions already will run on Arm processors. We’ll have to wait and see whether virtualization will also apply to Windows. Federighi did appear to say that directly booting into a different OS would not be possible. 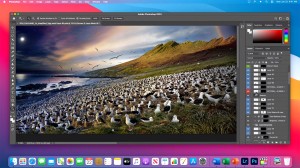 Naturally, users want to know if their favorite application is going to be ready on day one. Apple has been working closely with Adobe and Microsoft to ensure that Creative Cloud and Office applications will run natively. Those two are biggies. If you can’t run Photoshop or Illustrator correctly, then you’ve lost the entire design community – photographers, designers, web developers, ad agencies, etc. Likewise, if Word, Excel, or Powerpoint don’t work, you’ve lost every business enterprise. Apologies to video editors, but those two segments are more important to Mac sales than all the video apps combined.

Will the operating systems merge?

Apple has said loudly and clearly that they don’t intend to merge macOS and iOS/iPadOS. Both the Mac and mobile businesses are very profitable and those products fulfill vastly different needs. It doesn’t make any business sense to mash them together in some way. You can’t run Big Sur on an iPad Pro nor can you run iPadOS 14 on a Mac. Yet, they are more than cousins under the hood. You will be able to run iOS/iPadOS applications, such as games, on an Arm-based Mac with Big Sur. This is determined by the developer, because they will retain the option to have some apps be iOS-only at the time the application is entered into the App Store.

Technology aside, the look, feel, style, and design language is now very close between these two operating system branches. Apple has brought back widgets to the Mac. You now have notification and control centers on all platforms that function in the same manner. The macOS Finder and iPad Files windows look similar to each other. Overall, the design language has been unified as typified by a return to more color and a common chiclet design to the icons. After all, nearly ever Apple product has a similar style with rounded corners, going back to the original 1984 Mac.

Are we close to actually having true macOS on an iPad Pro? Or a Mac with touch or Apple Pencil support? Probably not. I know a lot of Final Cut Pro X users have speculated about seeing “FCPX Lite” on the iPad, especially since we have Adobe’s Rush and LumaTouch’s LumaFusion. The speculation is that some stripped-down version of FCPX on the iPad should be a no-brainer. Unfortunately iPads lack a proper computer-style file system, standard i/o, and the ability to work with external storage. So, there are still reasons to optimize operating systems and applications differently for each hardware form factor. But a few years on – who knows?

Should you buy a Mac now?

If you need a Mac to get your work done and can’t wait, then by all means do so. Especially if you are a “pro” user requiring beefier hardware and performance. On the other hand, if you can hold off, you should probably wait until the first new machines are out in the wild. Then we’ll all have a better idea of price and performance. Apple still plans to release more Intel Macs within the next two years. The prevailing wisdom is that the current state of Apple’s A-series chips will dictate lower-end consumer Macs first. Obviously a new 12″ MacBook and the MacBook Air would be prime candidates. After that, possibly a Mac mini or even a smaller iMac. 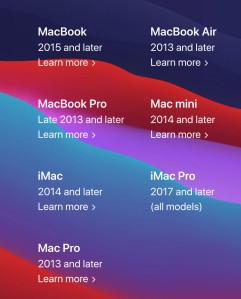 If that in fact is what will happen, then high-end MacBook Pros, iMacs, iMac Pros, and the new Mac Pro will all continue running Intel processors until comparable (or better) Apple Silicon chips become available. Apple is more willing to shake things up than any other tech company. In spite of that, they have a pretty good track record of supporting existing products for quite a few years. For example, Big Sur is supposed to be compatible with MacBook Pros and Mac Pros going back to 2013. Even though the FCPX product launch was rough, FCP7 continued to work for many years after that through several OS updates.

I just don’t agree with people who grouse that Apple abandons its existing costumers whenever one of these changes happen. History simply does not bear that out. Change is always a challenge – more for some types of users than others. But we’ve been here before. This change shouldn’t cause too much hand-wringing, especially if Apple Silicon delivers on its promise.

Click here for a nice recap of some of the other announcements from WWDC.