High-end Mac users waited six years for Apple to release its successor to the cylindrical 2013 Mac Pro. That’s a unit that was derided by some and was ideal for others. Its unique shape earned the nickname of the “trash can.” Love it or hate it that Mac Pro lacked the ability to expand and grow with the times. Nevertheless, many are still in daily service and being used to crank out great wok. 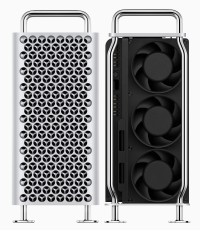 The 2019 Mac Pro revitalized Apple’s tower configuration – dubbed the “cheese grater” design. If you want expandability, this one has it in spades. But at a premium price that puts it way above the cost of a decked out 2013 Mac Pro. Unfortunately for many users, this leaves a gap in the product line – both in features and in price range.

If you want a powerful Mac in the $3,000 – $5,000 range without a built-in display, then there is none. I really like the top-spec versions of the iMac and iMac Pro, but if I already own a display, would like to only use an Apple XDR, or want an LG, Dell, Asus, etc, then I’m stuck. Naturally one approach would be to buy a 16″ MacBook Pro and dock it to an external display, using the MacBook Pro as a second display or in the clamshell configuration. I’ve discussed that in various posts and it’s one way nimble editing shops like Trim in London tend to work.

Another option would be the Mac Mini, which is closest to the unit that best fits this void. It recently got a slight bump up in specs, but it’s missing 8-core CPU options and an advanced graphics card. The best 6-core configuration might actually be a serviceable computer, but I would imagine effects requiring GPU acceleration will be hampered by the Intel UHD 630 built-in graphics. The Mini does tick a lot of the boxes, including wi-fi, Bluetooth, four Thunderbolt 3/USB-C ports, HDMI 2.0, two USB 3.0 ports, plus Ethernet and headphone jacks.

I’ve tested both the previous Mac Mini iteration (with and w/o eGPU) and the latest 16″ MacBook Pro. Both were capable Macs, but the 16″ truly shines. I find it hard to believe that Apple couldn’t have created a Mac Mini with the same electronics as the loaded 16″ MacBook Pro. After all, once you remove the better speaker system, keyboard, and battery from the lower case of the laptop, you have about the same amount of “guts” as that of the Mac Mini. I think you could make the same calculation with the iMac electronics. Even if the Mini case needed to be a bit taller, I don’t see why this wouldn’t be technically possible.

Here’s a hypothetical Mac Mini spec (similar to the MacBook Pro) that could be a true sweet spot:

Such a configuration would likely be in the range of $3,000 – $5,000 based on the BTO options of the current Mini, iMac, and MacBook Pro. Of course, if you bump the internal SSD from 1TB to the higher capacities, the total price will go up. In my opinion, it should be easy for Apple to supply such a version without significant re-engineering. I recognize that if you went with a Xeon-based configuration, like the iMac Pros, then the task would be a bit more challenging, in part due to power demands and airflow. Naturally, an even higher-spec’ed Mac like this in the $5,000 – $10,000 range would also be appealing, but that would likely be a bridge too far for Apple.

What I ultimately want is a reasonably powerful Mac without being forced to also purchase an Apple display as this isn’t always the best option. But I want that without spending as much as on a car to get there. I understand that such a unit wouldn’t have the ability to add more cards, but then neither do the iMacs and MacBook Pros. So I really don’t see this as a huge issue. I feel that this configuration would be an instant success with many editors. Plug in the display and storage of your choice and Bob’s your uncle.

I’m not optimistic. Maybe Apple has run the calculation that such a version would rob sales from the 2019 Mac Pro or iMac Pros. Or maybe they simply view the Mini as fitting into a narrow range of server and home computing use cases. Whatever the reason, it seems clear to me that there is a huge gap in the product line that could be served by a Mac Mini with specs such as these.

On the other hand, Apple’s virtual WWDC is just around the corner, so we can always hope!