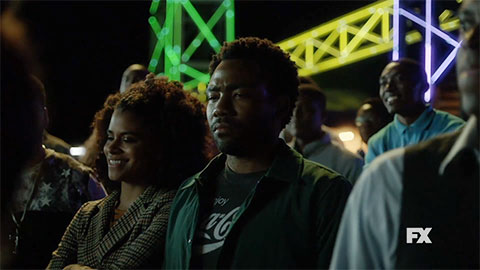 Atlanta just wrapped its second season on the FX Network. The brainchild of actor/writer/producer/director Donald Glover, Atlanta is the story of Earn Marks, a Princeton drop-out who returns home to Atlanta, where he decides to manage his cousin’s rap career. The show is very textural and plot is secondary. It loosely follows Earn and the people in his life – specifically his cousin, Paper Boi – an up and coming rapper – and his friend and posse-mate, Darrius.

The visual architect of the show is director Hiro Murai, who has directed the majority of the episodes. He has set an absurdist tone for much of the story. Any given episode can be wildly different from the episodes that come on either side of it. The episodes taken as a whole make up what the series is about.

I recently had a chance to interview the show’s editors, Kyle Reiter and Isaac Hagy, about working on Atlanta and their use of Adobe Premiere Pro CC to edit the series.

Isaac Hagy: “I have been collaborating with Hiro for years. We went to college together and ever since then, we’ve been making short films and music videos. I started out doing no-budget music videos, then eventually moved into documentaries and commercials, and now television. A few years ago, we made a short film called Clapping for the Wrong Reasons, starring Donald. That became kind of an aesthetic precursor that we used in pitching this show. It served as a template for the tone of Atlanta.” 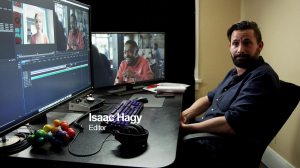 “I’ve used pretty much every editing software under the sun – cutting short films in high school on iMovie, then Avid in college when I went to film school at USC. Once I started doing short film projects, I found Final Cut Pro to be more conducive to quick turnarounds than Avid. I used that for five or six years, but then they stopped updating it, so I needed to switch over to a more professional alternative. Premiere Pro was the easiest transition from Final Cut Pro and, at that time, Premiere was starting to be accepted as a professional platform. A lot of people on the show come from a very DIY background, where we do everything ourselves. Like with the early music videos – I would color and Hiro would do effects in After Effects. So, Premiere was a much more natural fit. I am on a show using [Avid] Media Composer right now and it feels like a step backwards.”

With a nod to their DIY ethos, post-production for Atlanta also follows a small, collective approach.

Kyle Reiter: “We rent a post facility that is just a single-story house. We have a DIY server called a NAS that one of our assistants built and all the media is stored there. It’s just a tower. We brought in our own desktop iMacs with dual monitors that we connect to the server over Ethernet. The show is shot with ARRI Amira cameras in a cinema 2K format. Then that is transcoded to proxy media for editing, which makes it easy to manage. The color correction is done in Resolve. Our assistant editors online it for the colorist, so there’s no grading in-house.” Atlanta airs on the FX Network in the 720p format.

The structure and schedule of this production make it possible to use a simple team approach. Projects aren’t typically shared among multiple editors and assistants, so a more elaborate infrastructure isn’t required to get the job done.

Isaac Hagy: “It’s a pretty small team. There’s Kyle and myself. We each have an assistant editor. We just split the episodes, so I took half of the season and Kyle the other half. We were pretty self-contained, but because there were an odd number of episodes, we ended up sharing the load on one of them. I did the first cut of that episode and Kyle took it through the director’s cut. But other than that, we each had our individual episodes.”

Kyle Reiter: “They’re in Atlanta for several months shooting. We’ll spend five to seven days doing our cut and then typically move on to the next thing, before we’re finished. That’s just because they’re out of town for several months shooting and then they’ll come back and continue to work. So, it’s actually quite a bit of time calendar-wise, but not a lot of time in actual work hours. We’ll start by pulling selects and marking takes. I do a lot of logging within Premiere. A lot of comments and a lot of markers about stuff that will make it easy to find later. It’s just breaking it down to manageable pieces. Then from there, going scene-by-scene, and putting it all together.”

Many scripted television series that are edited on Avid Media Composer rely on Avid’s script integration features. This led me to wonder whether Reiter and Hagy missed such tools in Premiere Pro.

Isaac Hagy: “We’re lucky that the way in which the DP [Christian Sprenger] and the director shoot the series is very controlled. The projects are never terribly unwieldy, so really simple organizing usually does the trick.”

Kyle Reiter: “They’re never doing more than a handful of takes and there aren’t more than a handful of set-ups, so it’s really easy to keep track of everything. I’ve worked with editors that used markers and just mark every line and then designate a line number; but, we don’t on this show. These episodes are very economical in how they are written and shot, so that sort of thing is not needed. It would be nice to have an Avid ScriptSync type of thing within Premiere Pro. However, we don’t get an unwieldy amount of footage, so frankly it’s almost not necessary. If it were on a different sort of show, where I needed that, then absolutely I would do it. But this is the sort of show I can get away with not doing it.”

Kyle Reiter: “I’m on a show right now being cut on Media Composer, where there are 20 to 25 takes of everything. Having ScriptSync is a real lifesaver on that one.”

Both editors are fans of Premiere Pro’s advanced features, including the ability to use it with After Effects, along with the new sound tools added in recent versions.

Isaac Hagy: “In the offline, we create some temp visual effects to set the concepts. Some of the simpler effects do make it into the show. We’ll mock it up in Premiere and then the AE’s will bring it into After Effects and polish the effect. Then it will be Dynamic Link-ed back into the Premiere timeline.”

“We probably go deeper on the sound than any other technical aspect of the show. In fact, a lot of the sound that we temp for the editor’s cut will make it to the final mix stage. We not only try to source sounds that are appropriate for a scene, but we also try to do light mixing ourselves – whether it’s adding reverb or putting the sound within the space – just giving it some realism. We definitely use the sound tools in Premiere quite a bit. Personally, I’ve had scenes where I was using 30 tracks just for sound effects.”

“I definitely feel more comfortable working in sound in Premiere than in Media Composer -and even than I felt in Final Cut. It’s way easier working with filters, mixing, panning, and controlling multiple tracks at once. This season we experimented with the Essential Sound Panel quite a bit. It was actually very good in putting a song into the background or putting sound effects outside of a room – just creating spaces.”

When a television series or film is about the music industry, the music in the series plays a principal role. Sometimes that is achieved with a composed score and on other shows, the soundtrack is built from popular music.

Kyle Reiter: “There’s no score on the show that’s not diegetic music, so we don’t have a composer. We had one episode this year where we did have score. Flying Lotus and Thundercat are two music friends of Donald’s that scored the episode. But other than that, everything else is just pop songs that we put into the show.”

Isaac Hagy: “The decision of which music to use is very collaborative. Some of the songs are written in the script. A lot are choices that Kyle and I make. Hiro will add some. Donald will add some. We also have two great music supervisors. We’re really lucky that we get nearly 90% of the music that we fall in love with cleared. But when we don’t, our music supervisors recommend some great alternatives. We’re looking for an authenticity to the world, so we try to rely on tracks that exist in the real world.”

Atlanta provides an interesting look of the city’s hip-hop culture on the fringe. A series that has included an alligator and Donald Glover in weird prosthetic make-up – and where Hiro Murai takes inspiration from The Shining – certainly isn’t your run-of-the-mill television series. It definitely leaves fans wanting more, but to date, a third season has not yet been announced.

This interview was recorded using the Apogee MetaRecorder for iOS application and transcribed thanks to Digital Heaven’s SpeedScriber.