Creating multichannel, “split-track” master exports of your final sequences is something that should be a standard step in all of your productions. It’s often a deliverable requirement and having such a file makes later revisions or derivative projects much easier to produce. If you are a Final Cut Pro X user, the “audio lanes” feature makes it easy to organize and export sequences with isolated channels for dialogue, music, and effects. FCPX pros like to tweak the noses of other NLE users about how much easier it is in FCPX. While that’s more or less true – and, in fact, can be a lot deeper than simply a few aggregate channels – that doesn’t mean it’s particularly hard or less versatile in Premiere Pro.

Last year I wrote about how to set this up using Premiere submix tracks, which is a standard audio post workflow, common to most DAW and mix applications. Go back and read the article for more detail. But, what about sequences that are already edited, which didn’t start with a track configuration already set up with submix tracks and proper output routing? In fact, that’s quite easy, too, which brings me to today’s post.

Start out by editing as you always have, using your standard sequence presets. I’ve created a few custom presets that I normally use, based on the several standard formats I work in, like 1080p/23.976 and 1080p/29.97. These typically require stereo mixes, so my presets start with a minimum configuration of one picture track, two standard audio tracks, and stereo output. This is the starting point, but more video and audio tracks get added, as needed, during the course of editing.

Get into a habit of organizing your audio tracks. Typically this means dialogue and VO tracks towards the top (A1-A4), then sound effects (A5-A8), and finally music (A9-A12). Keep like audio types on their intended tracks. What you don’t want to do is mix different audio types onto the same track. For instance, don’t put sound effects onto tracks that you’ve designated for dialogue clips. Of course, the number of actual tracks needed for these audio types will vary with your projects. A simple VO+music sequence will only have two to four tracks, while dramatic entertainment pieces will have a lot more. Delete all empty audio tracks when you are ready to mix.

Mix for stereo output as you normally would. This means balancing components using keyframes and clip mixing. Then perform overall adjustments and “riding faders” in the track mixer. This is also where I add global effects, like compression for dialogue and limiting for the master mix.

The next step is to create or open a new multichannel DME (dialogue/music/effects) sequence. I’ve already created a custom preset, which you may download and install. It’s set up as 1080p/23.976, with two standard audio channels and three, pre-labelled stereo submix channels, but you can customize yours as needed. The master output is multichannel (8-channels), which is sufficient to cover stereo pairs for the final mix, plus isolated pairs for each of the three submixes – dialogue, music, and effects.

Next, copy-and-paste all clips from your final stereo sequence to the new multichannel sequence. If you have more than one track of picture and two tracks of audio, the new blank sequence will simply auto-populate more tracks once you paste the clips into it. The result should look the same, except with the additional three submix tracks at the bottom of your timeline. At this stage, the output of all tracks is still routed to the stereo master output and the submix tracks are bypassed.

Now open the track mixer panel and, from the pulldown output selector, switch each channel from master to its appropriate submix channel. Dialogue tracks to DIA, music tracks to MUS, and effects tracks to SFX. The sequence preset is already set up with proper output routing. All submixes go to output 1 and 2 (composite stereo mix), along with their isolated output – dialogue to 3 and 4, effects to 5 and 6, music to 7 and 8. As with your stereo mix, level adjustments and plug-in processing (compression, EQ, limiting, etc.) can be added to each of the submix channels.

Note: while not essential, multichannel, split-track master files are most useful when they are also textless. So, before outputting, I would recommend disabling all titles and lower third graphics in this sequence. The result is clean video – great for quick fixes later in the event of spelling errors or a title change. 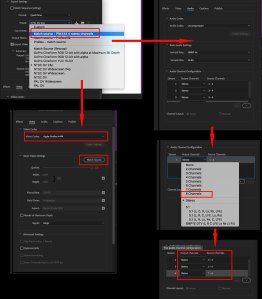 Now that the sequence is properly organized, you’ve got to export the multichannel sequence. I have created a mastering export preset, which you may also download. It works in the various Adobe CC apps, but is designed for Adobe Media Encoder workflows. This preset will match its output to the video size and frame rate of your sequence and master to a file with the ProRes4444 codec. The audio is set for eight output channels, configured as four stereo pairs – composite mix, plus three DME channels.

To test your exported file, simply reimport the multichannel file back into Premiere Pro and drop it onto a timeline. There you should see four independent stereo channels with audio organized according to the description above.

I have created a sequence and an export preset, which you may download here. I have only tested these on Mac systems, where they are installed into the Adobe folder contained within the user’s Documents folder. The sequence preset is placed into the Premiere Pro folder and the export preset into the Adobe Media Encoder folder. If you’ve updated the Adobe apps along the way, you will have a number of version subfolders. As of December 2017, the 12.0 subfolder is the correct location. Happy mixing!