When I started video editing, the norm was an edit suite with three large quadraplex (2”) videotape recorders, video switcher, audio mixer, B&W graphics camera(s) for titles, and a computer-assisted, timecode-based edit controller. This was generally considered  an “online edit suite”, but in many markets, this was both “offline” (creative cutting) and “online” (finishing). Not too long thereafter, digital effects (ADO, NEC, Quantel) and character generators (Chyron, Aston, 3M) joined the repertoire. 2” quad eventually gave way to 1” VTRs and those, in turn, were replaced by digital – D1, D2, and finally Digital Betacam. A few facilities with money and clientele migrated to HD versions of these million dollar rooms.

Towards the midpoint in the lifespan for this way of working, nonlinear editing took hold. After a few different contenders had their day in the sun, the world largely settled in with Avid and/or Media 100 rooms. While a lower cost commitment than the large online bays of the day, these nonlinear edit bays (NLE) still required custom-configured Macs, a fair amount of external storage, along with proprietary hardware and monitoring to see a high-quality video image. Though crude at first, NLEs eventually proved capable of handling all the video needs, including HD-quality projects and even higher resolutions today.

The trend towards smaller

As technology advanced, computers because faster and more powerful, storage capacities increased, and software that required custom hardware evolved to work in a software-only mode. Today, it’s possible to operate with a fraction of the cost, equipment, and hassle of just a few years ago, let along a room from the mid-70s. As a result, when designing or installing a new room, it’s important to question the assumptions about what makes a good edit bay configuration.

For example, today I frequently work in rooms running newer iMacs, 2013 Mac Pros, and even MacBook Pro laptops. These are all perfectly capable of running Apple Final Cut Pro X, Adobe Premiere Pro, Avid Media Composer, and other applications, without the need for additional hardware. In my interview with Thomas Grove Carter, he mentioned often working off of his laptop with a connected external drive for media. And that’s at Trim, a high-end London commercial editing boutique.

In my own home edit room, I recently set aside my older Mac Pro tower in favor of working entirely with my 2015 MacBook Pro. No more need to keep two machines synced up and the MBP is zippier in all respects. With the exception of some heavy-duty rendering (infrequent), I don’t miss using the tower. I run the laptop with an external Dell display and have configured my editing application workspaces around a single screen. The laptop is closed and parked in a BookArc stand tucked behind the Dell. But I also bought a Rain stand for those times when I need the MBP open and functioning as a second display. 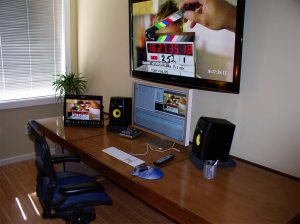 I find more and more editors working in similar configurations. For example, one of my clients is a production company with seven networked (NAS storage) workstations. Most of these are iMacs with few other connected peripherals. The main room has a 2013 “trash can” Mac Pro and a bit more gear, since this is the “hero” room for clients. If you are looking to downsize your editing environment, here are some pointers.

While you can work strictly from a laptop, I prefer to build it up for a better experience. Essential for me is a Thunderbolt dock. Check out OWC or CalDigit for two of the best options. This lets you connect the computer to the dock and then everything else connects to that dock. One Thunderbolt cable to the laptop, plus power for the computer, leaving you with a clean installation with an easy-to-move computer. From the dock, I’m running a Presonus Audiobox USB audio interface (to a Mackie mixer and speakers), a TimeMachine drive, a G-Tech media drive, and the Dell display. If I were to buy something different today, I would use the Mackie Onyx Blackjack interface instead of the Presonus/Mackie mixer combo. The Blackjack is an all-in-one solution.

Expand your peripherals as needed

At the production company’s hero room, we have the extra need to drive some video monitors for color correction and client viewing. That room is similarly configured as above, except with a Mac Pro and connection to a QNAP shared storage solution. The latter connects over 10Gb/s Ethernet via a Sonnet Thunderbolt/Ethernet adapter.

When we initially installed the room, video to the displays was handled by a Blackmagic Design UltraStudio device. However, we had a lot of playback performance issues with the UltraStudio, especially when using FCPX. After some experimenting, we realized that both Premiere Pro and FCPX can send a fullscreen, [generally] color-accurate signal to the wall-mounted flat panel using only HDMI and no other video i/o hardware. We ended up connecting the HDMI from the dock to the display and that’s the standard working routine when we are cutting in either Premiere Pro or Final Cut.

The rub for us is DaVinci Resolve. You must use some type of Blackmagic Design hardware product in order to get fullscreen video to a display when in Resolve. Therefore, the Ultrastudio’s HDMI port connects to the second HDMI input of the large client display and SDI feeds a separate TV Logic broadcast monitor. This is for more accurate color rendition while grading. With Media Composer, there were no performance issues, but the audio and video signal wants to go through the same device. So, if we edit Avid, then the signal chain goes through the UltraStudio, as well.

All of this means that in today’s world, you can work as lightly as you like. Laptop-only – no problem. iMac with some peripherals – no problem. A fancy, client-oriented room – still less hassle and cost than just a few short years ago. Load it up with extra control surfaces or stay light with a keyboard, mouse, or tablet. It all works today – pretty much as advertised. Gone are the days when you absolutely need to drop a small fortune to edit high-quality video. You just have to know what you are doing and understand the trade-offs as they arise.