Editors often face the dilemma of dealing with less-than-perfect footage. Focus is the bane of this challenge, where you have the ideal shot, but the operator missed the optimal focus, leaving a useable, albeit soft, image. Editing and compositing apps offer a number of built-in and third-party sharpen and unsharp mask filters that can be employed as a fix. While you can’t really fix the focus issue, you can sharpen the image so that it is perceived by the viewer as being better in focus. All of these filters work on the concept of localized contrast. This means that any dark-to-light edge transition within the image is enhanced and contrast in that area is increased. The dark area is darkened and the brighter part enhanced. This creates a halo effect, which can become quite visible as you increase the amount of sharpening, but also quite obnoxious when you push the amount to its full range. A little bit improves the image – a lot creates an electric, stylized effect.

One of the better sharpening filters on the market is Digital Anarchy’s Samurai Sharpen, which is available for Apple Final Cut Pro X, Adobe Premiere Pro CC and After Effects CC. (According to their website, Avid and OpenFX plug-ins are in development and coming soon.) What makes Samurai Sharpen different is that it includes sophisticated masking in order to restrict the part of the image to be sharpened. For example, on a facial close-up, you can enhance the sharpness of eyes without also pushing the skin texture by an unflattering amount. Yet, you still have plenty of control to push the image into a “look”. For example, the photographic trend these days seems to be photos with an obvious over-sharpened look for dramatic appeal. If you want subtle or if you want to stylize the image, both are achievable with Samurai Sharpen. 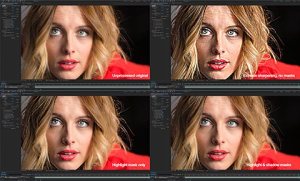 Click any of the example images to see an enlarged view. In these comparisons, pay attention to not only the eyes, but also lips and strands of hair, as these are also affected by sharpening. (Image courtesy of Blackmagic Design.) 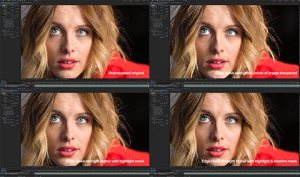 The effect controls are divided into three groups – Sharpen, Mask and Blend. The top three sharpen controls are similar to most other filters. Amount is self-explanatory, radius adjusts the size of the localized contrast halo, and edge mask strength controls the mask that determines what is or isn’t sharpened. The edge mask strength range markings might seem counter-intuitive, though. All the way to the left (0) means that you haven’t increased the mask strength, therefore, more of the image is being sharpened. In our facial close-up example, more texture (like the skin) and noise (background) would be sharpened. If you crank the slider all the way to the right (50), you have increased the mask strength, thus less of the image is being sharpened. For the face, this means the eyes and eyelashes are sharpened, but the skin stays smooth. The handy “show sharpening” toggle renders a quick hi-con image (mask) of the area being sharpened.

The real power of Samurai Sharpen is in the Mask Group. You have two controls each for shadow and highlights, as well as an on/off toggle to enable shadow and/or highlight masking. These four sliders function like a curves control, enabling you to broaden or restrict the range of dark or light portions of the image that will be affected by the sharpening. Enabling and adjusting the shadow mask controls lets you eliminate darker background portions of the image from being sharpened. You don’t want these areas sharpened, because it would result in a noisier appearance. The mask can also be blurred in order to feather the fall-off between sharpened and unprocessed portions of the image. Finally, there’s a layer mask control in this group, which shows up a bit differently between the Adobe apps and FCPX. Essentially it allows you to use another source to define your sharpening mask.

The last section is the Blend Group. This offers slider adjustments for the opacity of the shadow and highlight masks created in the Mask Group section. GPU acceleration results in an effect that is quick to apply and adjust, along with good playback performance.

While there are many free sharpening tools on the market, Digital Anarchy’s Samurai Sharpen is worth the extra for the quality and control it offers. Along with Beauty Box and Flicker Free, they offer a nice repertoire of image enhancement tools.