With more cameras shooting in some form of a log or flat color profile and more editing software being able to integrate color look-up tables (LUTs), numerous developers have designed their own LUT packages. Some, like Koji, strive to duplicate the colorimetry of certain film stocks, while others, such as SpeedLooks from LookLabs, create stylized “look” files that give you a range of creative color correction choices.

One new developer offering a package of easy to use LUTs is French filmmaker IWLTBAP. Through the website, you can pick up a comprehensive package of LUTs in the 32x32x32 .cube format, which are compatible with most modern editing and compositing software applications. If you edit in Adobe Premiere Pro CC, the Lumetri Color panel lets you browse and add any .cube LUTs you’ve saved on your hard drives. If you cut in Apple Final Cut Pro X, then the addition of a LUT plug-in, like Color Grading Central’s LUT Utility, enables you to add third-party LUTs to any clip on the timeline.

I took these LUTs for a spin and like most LUT packages, they come in a groups. First you have Utility LUTs, which are designed to convert color spaces from log to Rec709 (the standard video color space) or in the opposite direction. These are organized by camera type, since not all manufacturers use the same logarithmic values. Then the color correction or “look” LUTs are grouped into Standard and Log versions.

The Standard LUTs are to be applied to images that are already in Rec709 color space, while the Log versions can be used as a one-step LUT to be applied to generic log images. For example, you could apply both a Log-to-Rec709 Utility LUT and a second LUT from the Standard group to achieve your result. Or simply apply the single Log version to that same clip and end up with similar results. The dual-LUT approach gives you more incremental control over the Log conversion based on camera models, whereas the single-step solution is designed for generic log images. However, both can yield the desired grade, depending on the clip. In addition to the paid LUT package, IWLTBAP offers two Bonus LUTs, which are available as a free download from the website.

There are over 80 LUTs in each group and these are organized by color style and number. The numbers don’t really mean anything. In other words, they aren’t an attempt to mimic a film stock number. As you ascend in numbers, the next step is a more aggressive or somewhat different version of the previous. The key is the prefix and suffix for each. These LUT files carry a STD or LOG suffix so you know whether these are from the Log or Standard group. Then there’s a prefix: C for cold, H for hot, W for warm, F for film, and X for creative. Each style has several variations within that general look. For example, the LUT file labelled “F-9490-STD.cube” is a LUT with a filmic curve designed for a Rec709 image. 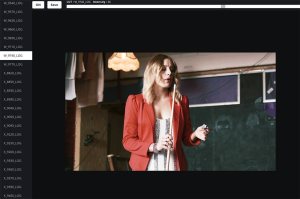 When working with LUTs, it’s often hard to know what result you get until you try it. Then if you don’t like the look, you have to continue to slowly browse through your LUT files – applying each, one at a time – until you get the right look. Often that can lead to a lot of trial and error. The IWLTBAP package ships with lightweight Windows and Mac preview applications, however, the developer warns of some occasional instability on some machines. The easiest solution is to use their web-based LUT previewer. Simply upload a reference JPEG from your clip and then toggle through the LUTs to preview how those will affect the shot.

I ran some tests on Blackmagic Design camera footage in both FCPX and Premiere Pro CC and got some really pleasing results. In the case of FCPX, if you use LUT Utility, you have to copy the .cube files into LUT Utility’s Motion Templates folder. This is found under Effects/CGC. Files stored there become visible in the LUT Utility pulldown menu. Note that only the first 50 or so files in that folder can be accessed, so be selective. If you apply two instances of the LUT Utility to a clip, then you can apply a Log-to-Rec709 conversion in the first and then the creative look LUT in the second. This plug-in has a mix slider, so you can adjust the intensity of the LUT to taste. As an effects plug-in, you can also place other effects, such as color correction in-between the two LUT Utility effects as part of that stack of effects. Doing this gives you nice control over color within FCPX with very little overhead on the application’s performance.

If you are an FCPX user that has adopted Color Grading Central’s ColorFinale grading tool as your go-to color correction plug-in, then all of this LUT management within the application can be simply handled from the ColorFinale interface itself. Stack layers of LUTs and other color tools all inside the ColorFinale panel. LUT choices can be added or removed using the integrated LUT Manager and then relaunching FCPX to activate them as part of ColorFinale.

If you are a Premiere Pro CC editor, then the latest version was enhanced with the Lumetri Color panel. This control is organized as a stack of color modules, which include two entry points to add a LUT – in the Basic and the Creative tabs. In my testing of the new URSA footage, I applied a Log-to-Rec709 LUT for the URSA in Basic and then one the “look” LUTs, like the free Aspen standard version, in Creative. You still have all the other color control in the Lumetri panel to fine-tune these, including the intensity level of the LUT.

LUTs are a creative tool that should be thought of as a stylistic choice. They aren’t an instant fix and shouldn’t be the only tool you use to color correct a clip. However, the LUTs from IWLTBAP provide a good selection of looks and moods that work well with a wide range of shots. Plus the package is very affordable and even more so if you get it after reading this blog! Readers who are interested can get 25% off of the retail price using the discount code DIGITALFILMS. Or by using this direct link.

Last but not least, check out the free, downloadable 4K film grain clip. It’s a ten second ProRes file that can be overlaid or blended to add grain to your shot.