The decade of the 1970s was the heyday of the rock music business when a hit record nearly made you a king. It was the time right after Woodstock. Top bands like Led Zeppelin and the Rolling Stones commanded huge stadium shows. The legendary excesses of the music industry are most often encapsulated as “sex, drugs, and rock-n-roll”. Now the New York music and record company scene of that era has been brought to the screen in the new HBO series, Vinyl. The series was created by Mick Jagger & Martin Scorsese & Rich Cohen and Terence Winter.

Vinyl is told largely through the eyes of Richie Finestra (played by Bobby Cannavale, Daddy’s Home, Ant-Man), the founder and president of the fictional American Century Records. He’s a rags-to-riches guy with a gift for discovering music acts. In the pilot episode, the company is about to be sold to Polygram, but a series of events changes the course of Finestra’s future, which sets up the basis for the series. It’s New York in the 70s at the birth of hip-hop, disco, and punk rock with a lot of cultural changes going on as the backdrop. The series features an eclectic cast, including James Jagger (Mick’s son) as the leader singer of a raw, New York punk band, The Nasty Bits.

The pilot teleplay was written by Terence Winter and George Mastras, based on a story developed by Cohen, Scorsese, Jagger, and Winter. This feature-length series kick-off was directed by Scorsese with Rodrigo Prieto (A Midsummer Night’s Dream, The Wolf of Wall Street) as director of photography. Martin Scorsese is certainly no stranger to the music industry with projects like Woodstock, The Last Waltz, The Blues, and Shine A Light to his credit. Coupled with his innate ability to tell entertaining stories about the underbelly of life in New York, Vinyl makes for an interesting stew. The pilot was a year in production and post and sets the tone for the rest of the series, which will be directed by seven other directors. This is the same model as with Boardwalk Empire. Scorsese and Jagger are part of the team of executive producers, with Winter as the show runner.

I recently interviewed David Tedeschi (George Harrison: Living in the Material World, Public Speaking), editor for the pilot episode of Vinyl. Kate Sanford and Tim Streeto are the editors for the series. Tedeschi has edited both documentary and narrative films prior to working with Martin Scorsese, for whom he’s edited a number of documentaries, such as No Direction Home and Shine A Light. But the Vinyl pilot is his first narrative project with Scorsese. Tedeschi explains, “The concept started out as an idea for a feature film. It landed at HBO, who was willing to green-light it as a full series. We were able to treat the pilot like a feature and had the luxury of being able to spend nearly a year in post, with some breaks in between.”

Even though Scorsese’s Sikelia Productions approached it like a feature, the editorial staff was small, consisting mainly of Tedeschi and one associate editor, Alan Lowe. Tedeschi talks about the post workflow, “The film was shot digitally with a Sony F55, but Scorsese and Prieto wanted to evoke a 16mm film look to be in keeping with the era. Deluxe handled the dailies – adding a film look emulation that included grain. They provided us with Avid DNxHD 115 media. Since most scenes were shot with two or three cameras, Alan would sync the audio by slate and then create multicam clips for me, before I’d start to edit. We were working on two Avid Media Composers connected to Avid ISIS shared storage. For viewing, we installed 50” Panasonic plasma displays that were calibrated by Deluxe. The final conform and color correction was  handed by Deluxe with Steve Bodner as colorist.”

He continues, “Scorsese had really choreographed the scenes precisely, with extensive notes. In the dailies process we would review every scene, and he would map out selects and then we’d work through it. In spite of being very specific about how he’d planned out a scene, he would often revisit a scene and look at other options in order to improve it. He was very open minded to new ways of looking at the material. Overall, it was a pretty tight script and edit. The first director’s cut was a little over two hours and the final came in at one hour and fifty-two minutes plus end credits.”

The pilot episode of Vinyl moves back and forth through a timeline of Finestra’s life and punctuates moments with interstitial elements, such as a guitar cameo by a fictionalized Bo Diddley. It’s easy to think these are constructs devised during editing, but Tedeschi says no. He explains, “I would love to take credit for that, but moving back and forth through eras was how the script was written. The interstitial elements weren’t in the script, but were Marty’s idea. He found extra time in the shooting schedule to film those and they worked beautifully in the edit.”

Many film editors have very specific ways they like to set up their bins in order to best sort and organize elected footage. Tedeschi’s approach is more streamlined. He explains, “My method is usually pretty simple. I don’t do special things in the bins. I will usually assemble a sequence of selected dailies for each scene. Then I’ll mark it up with markers and sometimes may color-code a few clips. On Vinyl, Alan would do the initial pass to composite some of the visual effects, like green screen window composites. He also handled a lot of the sound design for me.”

Vinyl is very detailed in how actual events, bands, people, and elements of the culture are represented and integrated into the story – although, in a fictionalized way. It’s a historical snapshot of the New York in the 70s and the culture of that time. Little elements like The King Biscuit Flower Hour (a popular radio show on progressive rock radio stations back then) playing on a radio or a movie marquee for Deep Throat easily pin-point the time and place. Anyone who’s seen the Led Zeppelin concert documentary, The Song Remains the Same, will remember one of the Madison Square Garden backstage scenes with an angry and colorful Peter Grant (Led Zeppelin’s manager). His persona and a similar event also made it into the story, but modified to be integral to the plot. 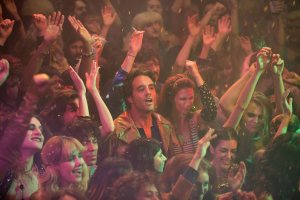 Accuracy is very important to Scorsese. Tedeschi says, “We have done documentaries about music and some of these people are part of our lives. We would all hear stories about some pretty over-the-top things, so a lot of this comes directly from their memories. The biggest challenge was to be faithful to New York in 1973.  It’s become this mythical place, but in Vinyl that’s the New York of Scorsese’s memory. We’ve certainly altered many actual facts, but even the most outrageous events that happen in the pilot and the series are rooted in true, historical events. We even reviewed historical footage. There was a very methodical approach.” Aside from the entertaining elements, it’s also a pretty solid story about how record companies actually operate.  He adds, “We had a screening towards the end of the editing process for the consultants, who had all worked in the record business. I knew we had done well, because they immediately launched into a lively discussion about contracts and industry standards and what names had been changed.”

This is a story about music and the music itself is a driving influence. Tedeschi concludes, “There is almost constant source music in the background. Scorsese went through each scene and we painstakingly auditioned many songs. One thing folks might not realize is that we sourced all of the recorded music that was used in their original formats. If a hit song was originally released as a 45 RPM record or an LP, then we’d track down a copy and try to use that. A few songs even came from 78 RPM records. We found a place that could handle high-quality transfers from such media and provide us with a digital file, which we used in the final mix. Often, a song may have been remastered, but we would compare our transfer with the remaster. The objective was to be faithful to the original sound – the way people heard it when it was released. After all, the series is called Vinyl for a reason. This was the director’s vision and how he remembered it.”