When AMC cable network decided to amp up the zombie genre with The Walking Dead series, it resulted in a huge hit. Building upon that success, they’ve created a new series that could be viewed as a companion story, albeit without any overlapping characters. Fear the Walking Dead is a new, six-episode series that starts season one on August 23. The story takes place across the country in Los Angeles and chronologically just before the outbreak in the original series. The Walking Dead was based on Robert Kirkman’s graphic novels by the same name and he has been involved in both versions as executive producer.

Unlike the original series, which was shot on 16mm film, Fear the Walking Dead is being shot digitally with ARRI ALEXA cameras and anamorphic lenses. That’s in an effort to separate the two visual styles, while maintaining a cinematic quality to the new series. I recently spoke with Tad Dennis, the editor of two of the six episodes in season one, about the production.

Tad Dennis started his editing career as an assistant editor on reality TV shows. He says, “I started in reality TV and then got the bump-up to full-time editing (Extreme Makeover: Home Edition, America’s Next Top Model, The Voice). However, I realized my passion was elsewhere and made the shift to scripted television. I started there again as an assistant and then was bumped back up to editing (Fairly Legal, Manhattan, Parenthood). Both types of shows really do have a different workflow, so when I shifted to scripted TV, it was good to start back as an assistant. That let me be very grounded in the process.”

Creating a new show with a shared concept

Dennis started with these thoughts on the new show, “We think of this series as more of a companion show to the other and not necessarily a spin-off or prequel. The producers went with different cameras and lenses for a singular visual aesthetic, which affects the style. In trying to make it more ‘cinematic’, I tend linger on wider shots and make more selective use of tight facial close-ups. However, the material really has to dictate the cut.” 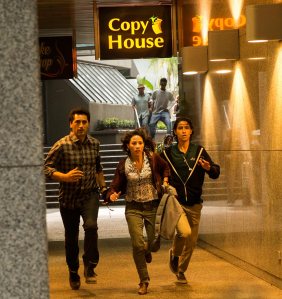 Three editors and three assistant editors work on the Fear the Walking Dead series, with each editor/assistant team cutting two of the six shows of season one. They are all working on Avid Media Composer systems connected to an Avid Isis shared storage solution. Scenes were shot in both Vancouver and in Los Angeles, but the editing teams were based in Los Angeles. ALEXA camera media was sent to Encore Vancouver and Encore Hollywood, depending on the shooting location. Encore staff synced sound and provided the editors with Avid DNxHD editorial media. The final color correction, conform, and finishing was also handled at Encore Hollywood.

Dennis described how post on this show differed from other network shows he’s worked on in the past. He says, “With this series, everything was shot and locked for the whole season by the first airdate. On other series, the first few shows will be locked, but then for the rest of the season, it’s a regular schedule of locking a new show each week until the end of the season. This first season was shot in two chunks for all six episodes – the Vancouver settings and then the Los Angeles scenes. We posted everything for the Vancouver scenes and left holes for the LA parts. The shows went all the way through director cuts, producer cuts, and network notes with these missing sections. Then when the LA portions came in, those scenes were edited and incorporated. This process was driven by the schedule. Although we didn’t have the pressure of a weekly airdate, the schedule was definitely tight.” Each of the editors had approximately three to four days to complete their cut of an episode after receiving the last footage. Then the directors got another four days for a director’s cut. 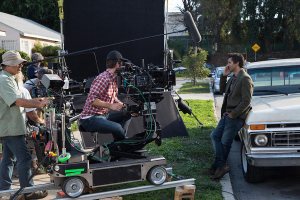 Often films and television shows go through adjustments as they move from script to actual production and ultimately the edit. Dennis feels this is more true of the first few shows in a new series than with an established series. He explains, “With a new series, you are still trying to establish the style. Often you’ll rethink things in the edit. As I went through the scenes, performances that were coming across as too ‘light’ had to be given more ‘weight’. In our story, the world is falling apart and we wanted every character to feel that all the way throughout the show. If a performance didn’t convey a sense of that, then I’d make changes in the takes used or mix takes, where picture might be better on one and audio better on the other.”

In spite of the tight schedule, the editors still had to deal with a wealth of footage. Typical of most hour-long dramas, Fear the Walking Dead is shot with two or three cameras. For very specific moments, the director would have some of the footage shot on 48fps. In those cases, where cameras ran at different speeds, Dennis would treat these as separate clips. When cameras ran at the same speed (for example, at 24fps for sync sound), such as in dialogue scenes, Susan Vinci (assistant editor) would group the clips as multicam clips. He explains, “The director really determines the quality of the coverage. I’d often get really necessary options on both cameras that weren’t duplicated otherwise. So for these shows, it helped. Typically this meant three to four hours of raw footage each day. My routine is to first review the multicam clips in a split view. This gives me a sense of what the coverage is that I have for the scene. Then I’ll go back and review each take separately to judge performance.” 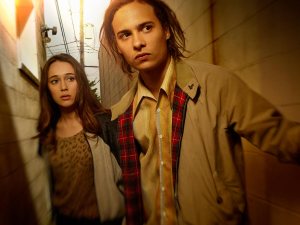 Dennis feels that sound is critical to his creative editing process. He continues, “Sound is very important to the world of Fear the Walking Dead. Certain characters have a soundscape that’s always associated with them and these decisions are all driven by editorial. The producers want to hear a rough cut that’s as close to airable as possible, so I spend a lot of time with sound design. Given the tight schedule on this show, I would hand off a lot of this to my long-time assistant, Susan. The sound design that we do in the edit becomes a template for our sound designer. He takes that, plus our spotting notes, and replaces, improves, and enhances the work we’ve done. The show’s music composer also supplied us with a temp library of past music he’d composed for other productions. We were able to use these as part of our template. Of course, he would provide the final score customized to the episode. This score would be based on our template, the feelings of the director, and of course the composer’s own input for what best suited each show.” 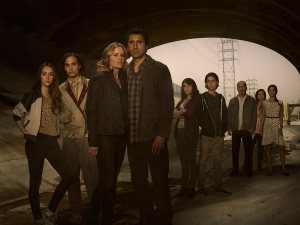 Dennis is an unabashed Avid Media Composer proponent. He says, “Over the past few years, the manufacturers have pushed to consolidate many tools from different applications. Avid has added a number of Pro Tools features into Media Composer and that’s been really good for editors. There are many tools I rely on, such as those audio tools. I use the Audiosuite and RTAS filters in all of my editing. I like dialogue to sound as it would in a live environment, so I’ll use the reverb filters. In some cases, I’ll pitch-shift audio a bit lower. Other tools I’ll use include speed-ramping and invisible split-screens, but the the trim tool is what defines the system for me. When I’m refining a cut, the trim tool is like playing a precise instrument, not just using a piece of software.”

Dennis offered these parting suggestions for young editors starting out. “If you want to work in film and television editing, learn Media Composer inside and out. The dominant tool might be Final Cut or Premiere Pro in some markets, but here in Hollywood, it’s largely Avid. Spend as much time as possible learning the system, because it’s the most in-demand tool for our craft.”