Many editors are on the constant journey for just the right, cool set of plug-ins. By doing so, they often lock themselves into a single host application and often even a single machine to which the plug-ins have been licensed. If that sounds familiar and you are looking for an alternative, then moving to a package of drag-and-drop effects is the way to go. One of the best developers for such effects is Rampant Design Tools.

Rampant was founded by veteran visual effects artist Sean Mullen, so the effects have been created from the standpoint of what actually works. The beauty of these drag-and-drop effects is that you can use them with any nonlinear editing or compositing application, regardless of whether this is on Mac or Windows. As long as the system is running QuickTime and includes a playback component for Apple ProRes codecs, you are ready. Since the actual effects are media files, they can be archived with the project and moved between systems, without any need to license a plug-in on another machine.

The Rampant Design Tools website offers a lot of options for how to purchase the effects, but their latest endeavor is Studio Essentials, Volume 1 and 2. These include paint effects, film grunge, distortion, flares, light transitions, fire, smoke, bokeh, snow, dust, and so much more. Nearly all of these elements originate from real and not synthetic footage, which Rampant has actually produced using RED cameras. The effects packages are available in 2K, 4K, and 5K resolutions. Even if you are only working in HD, you might still want a 4K package, because it permits you to reframe the effect to get a unique look, rather than by simply dropping in a stock effect “as is”. The elements are designed to be modular. For instance, you can build up layers of the distortion elements to create a different look. The files come as Apple ProRes 4444 media that works well when keyed or composited using blend modes. By combining, reframing, and adjusting blend modes, you avoid the rut of effects that can’t be modified or plug-in presets.

These collections are large enough, that delivering a 4K version of one of the Studio Essentials volumes would be unwieldy as DVD-ROMs or as a download. Instead, Rampant Design Tools sells these complete with their “Rampant Drives”. These are 4TB, USB 3.0 drives containing the complete volume. When you purchase the collection with this delivery option, you may select either Mac or PC formatting. Simply plug it in and start using the effects straight from the drive. Although there is no technical limitation to moving the files around on a SAN, simultaneous shared use is prohibited by the EULA. It states that the contents may only be used on one computer at any one time. 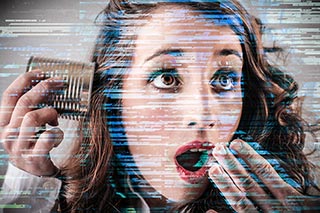 As there are a lot of effects in the contents of each volume, Rampant includes a PDF preview file for each set of effects. This is a quick starting point to decide which effects group to explore, without having to bring everything into your edit project at once. These PDFs can also be downloaded from the website, if you are trying to decide what to purchase. Effects may be purchased as part of a complete Studio Essentials volume or by individual categories in 2K, 4K or 5K sizes. That may still be a bit much for many users, so Rampant also offers a smaller set of HD effects for $29 each through its BudgetVFX companion site.

Most of the effects can be used as a single transition or overlay effect, but some in the Studio Essentials collections have been designed as toolkits. For example, there’s the Monster Toolkit, which is intended as a drag-and-drop creature kit. It contains over 1500 elements (stored as Photoshop files), made up of various body parts, such as eyes, ears, mouths, skin textures, and so on. The download size is a whopping 35.6 GB simply for that kit! One of the newest collections is a set of organic paint effects. This set includes 62 effects clips and features a wide range of real paint drip and splatter effects, which will easily blend with video using Overlay or Multiply modes.

To use the effects in an NLE, you would typically place the clip on a higher track above your main video. In FCP X this would be as a connected clip over the primary storyline. A transition effect would be positioned so that the meatiest part of the effect clip would be lined up over the cut to hide it. This is particularly true of lens flare and light blast transitions where the center of the clip often completely fills the screen. This technique has been used for years by After Effects compositors to add a transition between clips on separate layers.

Letting the effect control your video

A particularly cool trick that Mullen has posted as one of his tutorials (youtube.com/user/RampantMedia) is how to have the effect actually modify the video beneath. This is an aspect of many plug-ins and something not often associated with stock effects clips. His example uses one of the glitch effect clips. Typically this would be an overlay above the video that would obscure the image, but not necessarily distort or bend it with the effect. If you composite in After Effects, however, you can use its tools to have one layer affect the other. This is accomplished by adding two effects to the base video layer: Stylize – Motion Tile and Distort – Displacement Map. Motion Tile is set to wrap the image as it is stretched and mirrored, so you don’t see black on the edges. Displacement Map is linked to the layer with the glitch effect clip. Displacement is based on channels, so that the lower video is displaced where the effect is visible and not displaced where the glitch clip is black. The last step is to set keyframes for the start and stop of the displacement, so that the video isn’t displaced when you want it to be normal. This trick also works for other effects, such as lens flares. 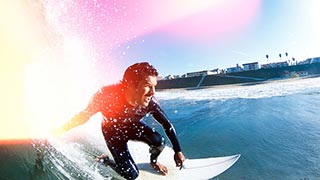 There are many stock effects vendors on the market. A quick internet search would pull up a page-full. However, most are still offering effects in older codecs or are limited to HD sizes at best. Many don’t offer a wide selection of effects. You might find some great lens flares from one company, but do they also offer fire effects? Quality, breadth of product offerings, and high-resolution is what sets Rampant Design Tools apart from these others. It’s a great way to add eye candy to any production with tools that give you total control in sculpting a unique look.