Editors like the integration of Adobe’s software, especially Dynamic Link and Direct Link between creative applications. This sort of approach is applied to collaborative workflows with Adobe Anywhere, which permits multiple stakeholders, including editors, producers and directors, to access common media and productions from multiple, remote locations. One company that has invested in the Adobe Anywhere environment is G-Men Media of Venice, California, who installed it as their post production hub. By using Adobe Anywhere, Jeff Way (COO) and Clay Glendenning (CEO) sought to improve the efficiency of the filmmaking process for their productions. No science project – they have now tested the concept in the real world on several indie feature films.

Their latest film, Divine Access, produced by The Traveling Picture Show Company in association with G-Men Media, is a religious satire centering on reluctant prophet Jack Harriman. Forces both natural and supernatural lead Harriman down a road to redemption culminating in a final showdown with his long time foe, Reverend Guy Roy Davis. Steven Chester Prince (Boyhood, The Ringer, A Scanner Darkly) moves behind the camera as the film’s director. The entire film was shot in Austin, Texas during May of 2014, but the processing of dailies and all post production was handled back at the Venice facility. Way explains, “During principal photography we were able to utilize our Anywhere system to turn around dailies and rough cuts within hours after shooting. This reduced our turnaround time for review and approval, thus reducing budget line items. Using Anywhere enabled us to identify cuts and mark them as viable the same day, reducing the need for expensive pickup shoots later down the line.”

Director of Photography Julie Kirkwood (Hello I Must Be Going, Collaborator, Trek Nation) picked the ARRI ALEXA for this film and scenes were recorded as ProRes 4444 in 2K. An on-set data wrangler would back up the media to local hard drives and then a runner would take the media to a downtown upload site. The production company found an Austin location with 1GB upload speeds. This enabled them to upload 200GB of data in about 45 minutes. Most days only 50-80GB were uploaded at one time, since uploads happened several times throughout each day.

Way says, “We implemented a technical pipeline for the film that allowed us to remain flexible.  Adobe’s open API platform made this possible. During production we used an Amazon S3 instance in conjunction with Aspera to get the footage securely to our system and also act as a cloud back-up.” By uploading to Amazon and then downloading the media into their Anywhere system in Venice, G-Men now had secure, full-resolution media in redundant locations. Camera LUTs were also sent with the camera files, which could be added to the media for editorial purposes in Venice. Amazon will also provide a long-term archive of the 8TB of raw media for additional protection and redundancy. This Anywhere/Amazon/Aspera pipeline was supervised by software developer Matt Smith. 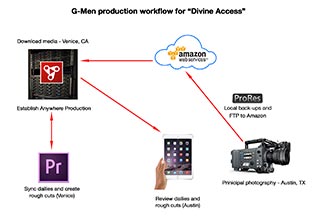 Back in Venice, the download and ingest into the Anywhere server and storage was an automated process that Smith programmed. Glendenning explains, “It would automatically populate a bin named for that day with the incoming assets. Wells [Phinny, G-Men editorial assistant] would be able to grab from subfolders named ‘video’ and ‘audio’ to quickly organize clips into scene subfolders within the Anywhere production that he would create from that day’s callsheet. Wells did most of this work remotely from his home office a few miles away from the G-Men headquarters.” Footage was synced and logged for on-set review of dailies and on-set cuts the next day. Phinny effectively functioned as a remote DIT in a unique way.

Remote access in Austin to the Adobe Anywhere production for review was made possible through an iPad application. Way explains, “We had close contact with Wells via text message, phone and e-mail. The iPad access to Anywhere used a secure VPN connection over the Internet. We found that a 4G wireless data connection was sufficient to play the clips and cuts. On scenes where the director had concerns that there might not be enough coverage, the process enabled us to quickly see something. No time was lost to transcoding media or to exporting a viewable copy, which would be typical of the more traditional way of working.” 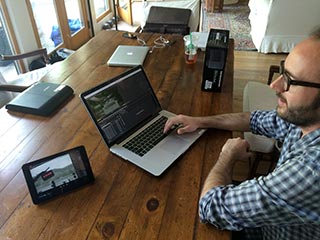 Once principal photography was completed, editing moved into the G-Men mothership. Instead of editing with Premiere Pro, however, Avid Media Composer was used. According to Way, “Our goal was to utilize the Anywhere system throughout as much of the production as possible. Although it would have been nice to use Premiere Pro for the creative edit, we believed going with an editor that shared our director’s creative vision was the best for the film. Kindra Marra [Scenic Route, Sassy Pants, Hick] preferred to cut in Media Composer. This gave us the opportunity to test how the system could adapt already existing Adobe productions.” G-Men has handled post on other productions where the editor worked remotely with an Anywhere production. In this case, since Marra lived close-by in Santa Monica, it was simpler just to set up the cutting room at their Venice facility. At the start of this phase, assistant editor Justin (J.T.) Billings joined the team.

Avid has added subscription pricing, so G-Men installed the Divine Access cutting room using a Mac Pro and “renting” the Media Composer 8 software for a few months. The Anywhere servers are integrated with a Facilis Technology TerraBlock shared storage network, which is compatible with most editing applications, including both Premiere Pro and Media Composer. The Mac Pro tower was wired into the TerraBlock SAN and was able to see the same ALEXA ProRes media as Anywhere. According to Billings, “Once all the media was on the TerraBlock drives, Marra was able to access these in the Media Composer project using Avid’s AMA-linking. This worked well and meant that no media had to be duplicated. The film was cut solely with AMA-linked media. External drives were also connected to the workstations for nightly back-ups as another layer of protection.”

Adobe Anywhere at the finish line

Once the cut was locked, an AAF composition for the edited sequence was sent from Media Composer to DaVinci Resolve 11, which was installed on an HP workstation at G-Men. This unit was also connected to the TerraBlock storage, so media instantly linked when the AAF file was imported. Freelance colorist Mark Todd Osborne graded the film on Resolve 11 and then exported a new AAF file corresponding to the rendered media, which now also existed on the SAN drives. This AAF composition was then re-imported into Media Composer.

Billings continues, “All of the original audio elements existed in the Media Composer project and there was no reason to bring them into Premiere Pro. By importing Resolve’s AAF back into Media Composer, we could then double-check the final timeline with audio and color corrected picture. From here, the audio and OMF files were exported for Pro Tools [sound editorial and the mix is being done out-of-house]. Reference video of the film for the mix could now use the graded images. A new AAF file for the graded timeline was also exported from Media Composer, which then went back into Premiere Pro and the Anywhere production. Once we get the mixed tracks back, these will be added to the Premiere Pro timeline. Final visual effects shots can also be loaded into Anywhere and then inserted into the Premiere Pro sequence. From here on, all further versions of Divine Access will be exported from Premiere Pro and Anywhere.”

Glendenning points out that, “To make sure the process went smoothly, we did have a veteran post production supervisor – Hank Braxtan – double check our workflow.  He and I have done a lot of work together over the years and has more than a decade of experience overseeing an Avid house. We made sure he was available whenever there were Avid-related technical questions from the editors.”

Way says, “Previously, on post production of [the indie film] Savageland, we were able to utilize Anywhere for full post production through to delivery. Divine Access has allowed us to take advantage of our system on both sides of the creative edit including principal photography and post finishing through to delivery. This gives us capabilities through entire productions. We have a strong mix of Apple and PC hardware and now we’ve proven that our Anywhere implementation is adaptable to a variety of different hardware and software configurations. Now it becomes a non-issue whether it’s Adobe, Avid or Resolve. It’s whatever the creative needs dictate; plus, we are happy to be able to use the fastest machines.”

Glendenning concludes, “Tight budget projects have tight deadlines and some producers have missed their deadlines because of post. We installed Adobe Anywhere and set up the ecosystem surrounding it because we feel this is a better way that can save time and money. I believe the strategy employed for Divine Access has been a great improvement over the usual methods. Using Adobe Anywhere really let us hit it out of the park.”