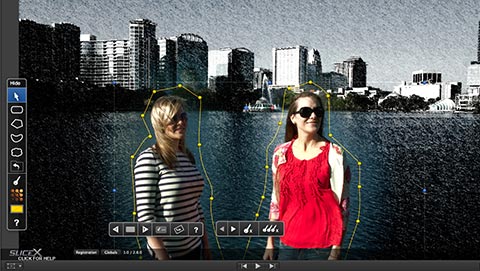 The structure of Apple’s Final Cut Pro X has brought many new and innovative plug-ins to market that extent the power of the application. One such plug-in is SliceX from CoreMelt. Developer Roger Bolton is a visual effects compositor who has been making FCP, Motion and After Effects plug-ins that fill the needs he sees coming from a VFX background. SliceX was originally developed as a mask-creation filter designed for FCP X, which has no built-in, custom masking tools. The latest version of SliceX has been improved to add keyframes to the effects parameters. It now also sports a built-in 2D planar tracker using Mocha technology licensed from Imagineer Systems.

SliceX is a set of six effects filters for Final Cut Pro X. These include shape masks for blurs, color correction, depth-of-field, object removal (cloning), vignettes and layer shapes. Each has a different set of parameters depending on the design of that filter – blur settings versus color correction sliders, for example. You can apply the filter on a single clip; or you can stack clips vertically and apply a filter to a higher clip in order to composite these clips together, enabled by the masks you have created. Each filter includes a common set of on-screen drawing tools for the mask shapes, as well as the Mocha tracking controls. Masks can be adjusted using control points with Bezier handles and can be moved, scaled and rotated along with the adjustment of edge softness.

Having built-in tracking is unique in a filter (except for the Boris Continuum Complete effects) and by adding the Mocha tracker, elevates the level of effects work you can do inside FCP X. Most trackers are point trackers, where you have to identify one to four consistent high contrast points within an image for the tracker to follow. The Mocha tracker is a planer tracker, which means it automatically calculates tracking points based on a wider surface area of flat planes detected in the image. When you use Mocha tracking in Adobe After Effects, for instance, the clip is sent out to the separate Mocha tracking application, which creates the tracking data. This data is then used to adjust scale, position and rotation information within After Effects’ transform tab. 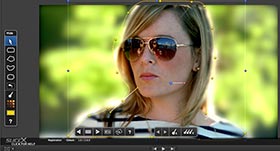 All of these extra steps are eliminated with SliceX. In keeping to the general FCP X philosophy of hiding the advanced technology under the hood, SliceX features a simple floating heads-up panel for Mocha and the drawing tools. Click the track arrow in the Mocha control panel to track forward or backward from the point you are parked and the mask is adjusted based on that track. Tracks can be set for either translate (position)/scale/rotation or for perspective. The tracker runs slower than real-time while it analyzes the shot, though this pass is relatively speedy as trackers go. Once the tracking analysis is complete, FCP X will apply and run the effect in real-time without rendering. In addition to the Mocha control panel, there’s also a new mask keyframe control panel. If you change the mask points within a clip, this automatically adds keyframes at every point where you have made adjustments. You can now step through or delete these keyframes, which is a separate function from the standard FCP X keyframe controls available within the effects Inspector window.

CoreMelt’s SliceX adds tremendous functionality to FCP X. You can use the effects to track and blur faces or act like tracked color correction nodes in DaVinci Resolve. The tracking is as simple and foolproof as it comes. Object removal is a great fix-it tool. Have an actress with a skin blemish on her cheek? Simply add the mask and offset the skin area. Track it and voila – the blemish is gone.

It’s easy to say good things about many filters. They are fun to use and give your videos unique stylized looks, but it’s rare that filters significantly improve the core function of your NLE. SliceX is one of those. It’s a must-have filter if you are serious about professional results with Final Cut Pro X. Use it on a few shots and you’ll instantly ask why every NLE doesn’t do the same – and do it so painlessly.