The video industry has been moving towards complete file-based workflows, but that doesn’t replace all of the functions that traditional videotape recorders served. To bridge the gap, companies such as AJA, Blackmagic Design, Convergent Design, Sound Devices and others had developed solid state recorders for field and studio operation. I recently tested Blackmagic Design’s HyperDeck Shuttle 2, which is touted as the world’s smallest uncompressed recorder.

Blackmagic’s HyperDeck series includes the Shuttle and two Studio versions. The latter are rack-mounted VTR-replacement devices equipped with dual SSDs (solid state drives). The Shuttle is a palm-sized, battery powered “brick” recorder. A single SSD slides into the Shuttle enclosure, which is only a bit bigger than the drive itself – enough to accommodate battery, controls and internal electronics. To keep the unit small, controls are basic record and transport buttons, much like that of a consumer CD player. You can operate it connected to an external power supply, on-board camera power or battery-powered. The internal, non-removable, rechargeable battery holds its charge for a little over one hour of continuous operation. The purchased unit includes a 12-volt power supply and a kit of international AC plug adapters.

The HyperDeck Shuttle includes 3Gb/s SDI and HDMI for digital capture and playback. Recording formats include 10-bit uncompressed QuickTime movies, as well as Avid DNxHD 175x or 220x in either QuickTime or MXF-wrapped variations. At the time I tested this device, it would not record Apple ProRes codecs. In November, Blackmagic Design released a free software update (version 3.6), which added ProRes HQ to the uncompressed and DNxHD options. It also added closed captioning support to all HyperDeck models.

Since the unit is designed for minimal interaction, all system set-up is handled by an external software utility. Install this application on your computer, connect the HyperDeck Shuttle via USB and then you’ll be able to select recording formats and other preferences, such as whether or not to trigger recording via SDI (for on-camera operation). The unit has no menu, which means you cannot alter, rename or delete files using the button controls or the software utility. There is a display button, but that was not active in the software version that I tested. 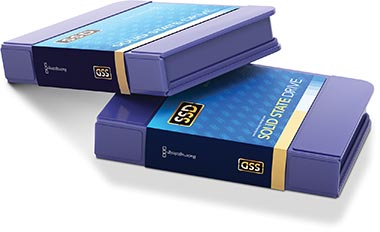 The SSD used is a standard 2.5” SATA III drive. Several different brands and types have been tested and qualified by Blackmagic Design for use with the HyperDeck units. These drives can be plugged into a generic hard drive dock, like a Thermaltake BlacX Duet to format the drive and copy/erase any files. The SSD was Mac-formatted, so it was simply a matter of pulling the drive out of the Shuttle’s slot and plugging it into the Duet, which was connected to my Mac Pro tower. This allowed me to copy files from the drive to my computer, as well as to move files back to the SSD for later playback from the Shuttle. (At IBC, Blackmagic also announced ExFAT support with the HyperDeck products.) The naming convention is simple, so recorded files are labeled Capture001, Capture002 and so on. Unfortunately, it does not embed reel numbers into the QuickTime files. Placing a similarly named file in the correct format (more on that in a moment) onto the drive makes it possible to use the Shuttle as a portable master playback device for presentations, film festivals, etc.

My evaluation unit came equipped with an 240GB OCZ Vertex 3 SSD. This is an off-the-shelf drive that runs under $200 at most outlets. By comparison, a Sony 124-minute HDCAM-SR videotape is now more expensive. It’s amazing that this SSD will sustain extended 10-bit uncompressed 1080i/59.94 recording and playback, when even most small drive arrays can’t do that! In practical terms, a 240GB drive will not hold a lot of 1080i 10-bit uncompressed media, so it’s more likely that you would use Avid DNxHD 220X or Apple ProRes HQ for the best quality. You could easily fit over 90 minutes of content on the same SSD using one of these codecs and not really see any difference in image quality.

I tested the unit with various codecs and frame rates. As a general rule, it’s not a good idea to mix different flavors on the same drive. For example, if you record both 1080i 10-bit uncompressed and 1080p/23.98 Avid DNxHD clips on the same drive, the HyperDeck Shuttle will only be able to playback the clips that match its current set-up. The Shuttle does auto-detect the incoming frame rate without the need to set that using the utility. It did seem to get “confused” in this process, making it hard to access the clips that I thought it should have been able to play. The clips are on the SSD, though, so you can still pull them off of the drive for use in editing. For standard operation, I would suggest that you set your preferences for the current production and stick to that until you are done.

Blackmagic Design sells a mounting plate as an accessory. It’s easy to install by unscrewing the HyperDeck’s back panel and screwing in the mounting plate in its place. I loaned the unit to a director of photography that I work with for use with a Canon C300.  Although there are common mounting holes, the DP still ended up having to use Velcro as a means to install both his battery and the Shuttle onto the same camera rig. The recordings looked good, but the SDI trigger did not properly stop the recording, requiring the DP to manually stop the unit with each take. Another issue for some is that it uses Mini-BNC connectors. This requires an investment in some Mini-BNC adapter cables for SDI operation, if you intend to connect it to standard BNC spigots.

Overall, the unit performed well in a variety of applications, but with a few quirks. I frequently found that it didn’t respond to my pushing the transport control buttons. I’m not sure if this was due to bad button contacts or a software glitch. It felt more like a software issue, in that once it “settled down” stepping forward and backward through clips and pushing the play button worked correctly. The only format I was not able to playback was 24p media recorded as MXF. Nevertheless the MXF formatting was correct, as I could drop these files right into an Avid Mediafiles folder on my media hard drive for editing with Avid Symphony.

HyperDeck Shuttle as a portable player

If you intend to use a HyperDeck Shuttle as a master playback device, then there a few things you need to know. It can capture interlaced, progressive and progressive-segmented-frame (PsF) footage, but it will only play these out as either interlaced or progressive via the SDI connection. Playing PsF as progressive is fine for many monitors and projectors, but the signal doesn’t pass through many routers or to some other recorders. Often these broadcast devices only function with a “true” progressive signal if the format is 720p/59.94. This means that it would be unlikely that you could play a 1080p/23.98 file (captured as PsF) and record that output from the HyperDeck Shuttle to a Sony HDCAM-SR video recorder, as an example.

It is possible to export a file from your Avid NLE, copy that file to the HyperDeck’s SSD using a drive dock and play it back from the unit; however, the specs get a little touchy. The HyperDeck Shuttle records audio as 16-bit/48kHz in the Little Endian format, but Avid exports its files as Big Endian. Endianness refers to how the bytes are ordered in a 16-, 32- or 64-bit word and whether the most or least significant bit is first. In the case of the Shuttle, this difference meant that I couldn’t get any audio output during playback. If your goal is to transfer a file to the Shuttle for duplication to another deck or playback in a presentation environment, then I would recommend that you take the time to make a real-time recording. Simply connect your NLE’s SDI output to the HyperDeck Shuttle’s SDI input and manually record to it, on-the-fly, like a tape deck.

The HyperDeck Shuttle is a great little unit for filling in workflow gaps. For example, if you don’t own any tape decks, but need to take a master to a duplication facility. You could easily use the Shuttle to transport your media to them and use it for on-site master playback. It’s a bit too quirky to be a great on-camera field recorder, but at $345 (plus the SSD), the Shuttle is an amazing value for image quality that good. As with their other products, Blackmagic Design has a history of enhancing the capabilities through subsequent software updates. I expect that in the future, we’ll see the HyperDeck family grow in a similar fashion.