The 4K buzz  seems to be steam-rolling the industry just like stereo3D before it. It’s too early to tell whether it will be an immediate issue for editors or not, since 4K delivery requirements are few and far between. Nevertheless, camera and TV-set manufacturers  are building important parts of the pipeline. RED Digital Cinema is leading the way with a post workflow that’s both proven and relatively accessible on any budget. A number of NLEs support editing and effects in 4K, including Avid DS, Autodesk Smoke, Adobe Premiere Pro, Apple Final Cut Pro X, Grass Valley EDIUS and Sony Vegas Pro.

Although many of these support native cutting with RED 4K media, I’m still a strong believer in the traditional offline-to-online editing workflow. In this post I will briefly outline how to use Avid Media Composer and Apple FCP X for a cost-effective 4K post pipeline. One can certainly start and finish a RED-originated project in FCP X or Premiere Pro for that matter, but Media Composer is still the preferred creative  tool for many editing pros. Likewise, FCP X is a viable finishing tool. I realize that statement will raise a few eyebrows, but hear me out. Video passing through Final Cut is very pristine, it supports the various flavors of 2K and 4K formats and there’s a huge and developing ecosystem of highly-inventive effects and transitions. This combination is a great opportunity to think outside of the box. 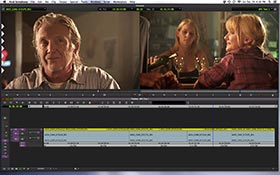 Avid has supported native RED files for several versions, but Media Composer is not resolution independent. This means RED’s 4K (or 5K) images are downsampled to 1080p and reformatted (cropped or letterboxed) to fit into the 16:9 frame. When you shoot with a RED camera, you should ideally record in one of their 4K 16:9 sizes. The native .r3d files can be brought into Media Composer using the “Link to AMA File(s)” function. Although you can edit directly with AMA-linked files, the preferred method is to use this as a “first step”. That means, you should use AMA to cull your footage down to the selected takes and then transcode the remainder when you start to fine tune your cut.

Avid’s media creation settings are the place to adjust the RED debayer parameters. Media Composer supports the RED Rocket card for accelerated rendering, but without it, Media Composer can still provide reasonable speed in software-only transcoding. Set the debayer quality to 1/4 or 1/8, and transcoding 4K clips to Avid DNxHD36 for offline editing will be closer to real-time on a fast machine, like an 8-core Mac Pro. This resolution is adequate for making your creative decisions.

When the cut is locked, export an AAF file for the edited sequence. Media should be linked (not embedded) and the AAF Edit Protocol setting should be enabled. In this workflow, I will assume that audio post is being handled by an audio editor/mixer running a DAW, such as Pro Tools, so I’ll skip any discussion of audio. That would be exported using standard AAF or OMF workflows for audio post. Note that all effects should be removed from your sequence before generating the AAF file, since they won’t be translated in the next steps. This includes any nested clips, collapsed tracks and speed ramps, which are notorious culprits in any timeline translation.

Blackmagic Design’s DaVinci Resolve 9 is our next step. You’ll need the full, paid version (software-only) for bigger-than-HD output. After launching Resolve, import the Avid AAF file from Resolve’s conform tab. Make sure you check “link to camera files” so that Resolve connects to the original .r3d media and not the Avid DNxHD transcodes. Resolve will import the sequence, connect to the media and generate a new timeline that matches the sequence exported from Media Composer. Make sure the project is set for the desired 4K format.

Next, open the Resolve project settings and adjust the camera raw values to the proper RED settings. Then make sure the individual clips are set to “project” in their camera settings tab. You can either use the original camera metadata or adjust all clips to a new value in the project settings pane. Once this is done, you are ready to grade the timeline as with any other production. Resolve uses a very good scaling algorithm, so if the RED files were framed with the intent of resizing and repositioning (for example, 5K files that are to be cropped for the ideal framing within a 4K timeline), then it’s best to make that adjustment within the Resolve timeline.

Once you’ve completed the grade, set up the render. Choose the FCP XML easy set-up and alter the output frame size to the 4K format you are using. Start the render job. Resolve 9 renders quite quickly, so even without a RED Rocket card, I found that 4K ProRes HQ or 4444 rendering, using full-resolution debayering, was completed in about a 6:1 ratio to running time on my Mac Pro. When the renders are done, export the FCP XML (for FCP X) from the conform tab. I found I had to use an older version of this new XML format, even though I was running FCP X 10.0.7. It was unable to read the newest version that Resolve had exported.

The last step is finishing. Import the Resolve-generated XML file, which will in turn create the necessary FCP Event (media linked to the 4K ProRes files rendered from Resolve) and a timeline for the edited sequence. Make sure the sequence (Project) settings match your desired 4K format. Import and sync the stereo or surround audio mix (generated by the audio editor/mixer) and rebuild any effects, titles, transitions and fast/slo-mo speed effects. Once everything is completed, use FCP X’s share menu to export your deliverables.