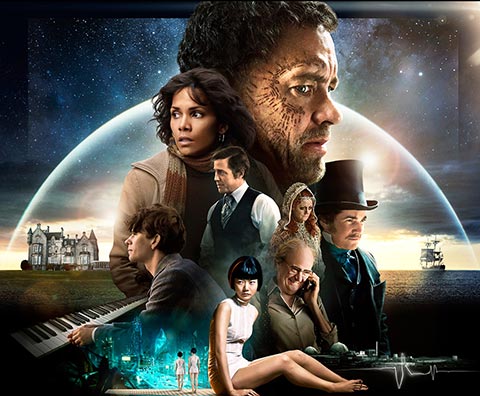 Every once in a while a film comes along that requires a bit of reflection to get the full meaning. Often you need several screenings to find all the clues and story details that you might have missed the first time. Cloud Atlas is such a film. It’s based on the multi-threaded, best-selling novel by David Mitchell and becomes the latest theatrical release by writer/directors Andy and Lana Wachowski (The Matrix trilogy). The Wachowskis are joined by co-writer/co-director Tom Tykwer (Run, Lola, Run) for a unique three-director production endeavor.

Cloud Atlas was originally thought to be un-adaptable as a film, but thanks to a script that earned the blessing of Mitchell, the three were able to make that a reality. The film is broken into six eras and locations (1849, 1936, 1973, 2012, 2144 and 2346). It features an ensemble cast whose members each play a variety of different characters within different parts of the story. The locations range from the South Pacific to the United States and Europe to a futuristic version of Seoul and finally a post-apocalyptic Hawaii. Instead of telling this as a series of sequential short stories, the different time frames are continually intercut. The audience is following six narrative episodes at once, yet taken together, the flow and story arc really become a single story. It’s as if the film proceeds by weaving in and out of six parallel universes. 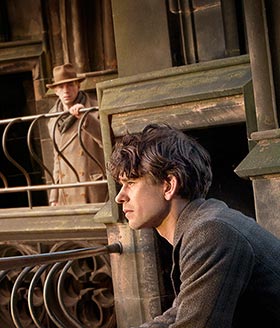 In broad strokes, Cloud Atlas is about freedom, love, karma and the connective fabric of the universe. Each person has elements of good and evil and talents that they use, which come out in different ways. The actors portray different characters throughout the film who may be heroes in one era, but villains in another. The yearning for freedom or love by a character that starts in one part might manifest itself in another character at a different time and place. Cloud Atlas is partially a reincarnation story. It plays on the sense of déjà vu, except that in this story, the experience that the character thinks has happened (like meeting someone) actually happens in a future life.

The scene structure of Cloud Atlas is crafted so that what would otherwise be single scenes in a standard drama are actually split among several different eras. Action that starts in 1849, for example, might be continued in a smash cut to 1936. Although the audience didn’t see the complete linear progression of what transpired in either, the result is that there’s both a carry-over and a residual effect, making it easy to mentally fill in the blanks for each. To help the audience connect the dots, there are several plot points and clues tying one era to another – sometimes in very obvious ways and at other times only as a reference or shot in a montage. 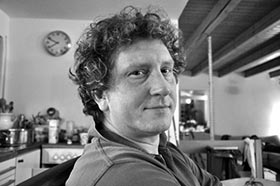 The task to pull this all together fell to veteran German film editor Alexander Berner (Resident Evil, The Baader Meinhoff Complex, The Debt, The Three Musketeers). Berner is a partner in the Munich-based editorial facility Digital Editors, which he helped start twenty years ago as the first all-digital facility in Germany. He had cut Tom Tywker’s film Perfume: The Story of a Murderer, but had never worked with Andy and Lana Wachowski before. They hit it off well and Berner was tapped to cut Cloud Atlas.

The film was shot in sixty days at various European locations with the three directors splitting up into two production units. The Wachowskis covered the 1849 ocean voyage, the 2144 rebellion in Neo Seoul and the events “after the fall” in the 24th century. Tykwer captured the stories of composer Frobisher (1936), journalist Ray (1973) and London publisher Cavendish (2012). For Berner, this meant double the amount of footage compared to a “normal” film, but without any more time to deliver a first cut. With the help of assistant editor Claus Wehlisch, Berner was able to keep up with camera and deliver his first assembly – complete with temp sound effects and score – two days after the shooting wrapped.

Alexander Berner explained the experience to me, “Andy and Lana had never worked with me before, so they didn’t really know what to expect. I think they may have had some initial concerns, since they hadn’t really seen anything cut up to that point. I had only sent a couple of assembled action scenes to them while they were filming. During the entire first assembly, it was all left up to Claus, a fabulous editorial team and me. We took a Christmas break and then started to do the fine cut in January.  I like to present a first assembly that’s a very watchable movie. I had assumed we’d sit down and review the whole film and then start making changes. When Andy, Lana and Tom saw the first reel they were all relieved at how good it looked and played, so we decided to dive right in at that point.”

The first assembly ran nearly three-and-a-half hours and it only took Berner about ten weeks to lock the picture at its final 172 minute length. Berner continued, “The first cut really followed the script, but the final film is a lot different in actual structure. The script is faithful to the book, but only about fifty percent is the same, as we had to cut out portions and extra characters that would have simply made this film too long. That was all with David Mitchell’s collaboration. I view the script as the ‘color palette’ and the edit is where you ‘mix the paint’. The footage from production came in a very scrambled fashion, so the only way to build the first cut was to follow the script. Once the three directors came in, then we had a chance to re-arrange scene elements or change line readings made necessary by the restructuring. Our main focus was to make sure we maintained the right emotional bow within a scene, even though we might start the action in one era and carry it forward into another. It was important to be able to tell these six stories as one big movie with one big emotional thought.”

According to Berner, every scene that was shot for the film is in the final cut, although sometimes the essence of it only survived as a shot within a montage or as a single, short scene. Just enough for the audience to follow the story or see a connection. I asked Berner his take on working with three directors. He responded, “At first I thought ‘What is this going to be like?’ Maybe each director would concentrate on only their scenes. In fact, it was a collaboration with everyone contributing and really a very harmonious and productive experience. We’d usually watch a scene and if it was OK or only needed a few minutes of tweaking, then we’d proceed to ‘mangle’ it into the bigger picture.”

One unusual aspect to Cloud Atlas is that co-director Tom Tykwer was also co-composer with Reinhold Heil and Johnny Klimek. A key element is The Cloud Atlas Sextet, the life’s work of the 1936 composer in the Frobisher narrative. This melody becomes a re-occurring piece throughout the film that helps bind eras together. For example, it’s part of the 1936 storyline, but then re-appears on a vinyl LP found by journalist Luisa Rey in a 1973 San Francisco record shop. The music itself becomes the score under these scenes, which binds the emotion together. You linger on the memory of the era you just left, while continuing into the next.

Some editors like to cut to temp scores, but that’s not Berner’s style. He explained, “I don’t like to cut a scene to music. Often this forces a pace that becomes gimmicky. I like to cut based on my internal sense of rhythm and then, with the right music, it all magically works. I try to avoid temp music, because it often doesn’t work well. If I know who the composer will be ahead of time, I’ll often lay in music from his previous scores to get a good feel for how the film will work. With Cloud Atlas, Tom gave us versions of many of the tracks ahead of time. This enabled me to cut in music that was far more representative of the final score than is usually possible.” 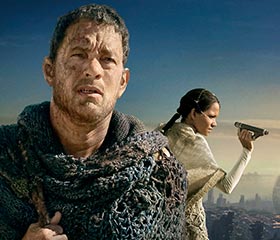 Watching the film for myself with an editor’s eye, it felt that the six narratives were reasonably balanced in their screen time. Berner told me there was no conscious effort to do that though. He continued, “It’s great that it felt balanced to you, but we were just trying to follow the emotion. If you actually measured the time, they aren’t equal. I do use Walter Murch’s trick of posting scene cards on the wall, which helped us greatly. Andy, Lana and Tom liked to re-arrange these to get an idea of the flow and it also helped to see which scenes had been deleted. At the end of the day, we’d always update the positions of the cards on the wall to reflect the current cut at that point.”

Alexander Berner cut the film on a Unity-connected Avid Media Composer system. He initially started on version 6.0 software, but ended up reverting to 5.5, because of reliability issues with Unity. Berner said, “I’ve been cutting on Avids for about twenty years and I generally love the software. In this case, version 6 dropped some color correction features that I needed, so I when back to the previous version. In narrative post, you don’t need a lot of fancy features, so the earlier software version was just fine. I’ve tried ScriptSync a few times, but never really ended up using it. In fact, I drive my assistants crazy setting up for it and then in the end, it just doesn’t fit my style.”

Thirteen visual effects companies tackled the 1,000-plus shots. Although this wasn’t overtly an effects-driven feature, the make-up prosthetics ended up getting a lot of digital love. Frank Griebe and John Toll were the two directors of photography for Cloud Atlas. It was shot on film and ARRI in Munich handled the lab work and the DI finishing, providing a seamless integration of these disparate elements.

Cloud Atlas represented a very unique challenge for Alexander Berner. “Every film has the usual challenges – working with a new director or cutting the film down to time. In this case, I’m probably the very first editor who’s ever worked with three directors on the same film. What’s truly unique, though, is that this film has several different genres and each has to be represented at its best. There’s action, comedy, a love story, intelligent dialogue, period drama and a thriller. Each one has to work as well in this film as if it were a single-genre film. As an editor, that was quite fun and maybe a once-in-a-lifetime opportunity. I realize though, that young people really respond to this approach, so maybe we’ll see a lot more of this style of film in the coming years.” Alexander Berner’s next film is another collaboration with Andy and Lana Wachowski – Jupiter Ascending – currently in pre-production.

(Additional coverage by Post magazine may be found here.)