You spend good money to shoot gorgeous footage and people go out of their way to make it look worse! I’m kidding, of course, but adding grunge and distress effects is all the rage. Every package of filters includes its share of aged film, TV interference, frame skip and channel switching effects. Naturally this includes the various packages available for FCP X. As a category, this actually includes a lot of filters that one might consider as grading, like “look” and “mood” effects. For example, a golden “desert heat” look.

A number of these grunge effects can be found as transition effects, which I covered a few posts ago. These include frame roll, skip and bump effects from Nattress, Digital Heaven and Luca VFX. Of these, Luca offers the most comprehensive set of such effects in their Grunge Collection of effects packages. For FCP X, these include transitions, filters and generators that cover film leaders, light leak and grunge effects, like splatters, burns and more. 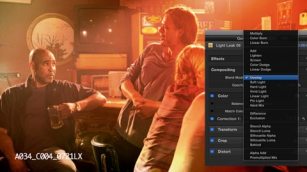 The way filters and transitions work is obvious, but generator effects usually stack onto the project timeline as a connected clip. This gives you the option of using blend modes to control how the generator is composited over the primary clip. Since most of these effects have a start, middle and end to how they are built, many can function as a transition device by placing the clip over a cut between two video clips.

As a generator effect, you can further modify it with other filters. For example, apply a light leak generator, change the blend mode to overlay and then apply a crosshatch effect to the generator. Luca VFX also offers a set of Alpha Transition effects, which are keyable QuickTime movies. I’ve reviewed these before, but a big selling point is that they’ll work with nearly any NLE, not just those that are based on the FxPlug architecture.

A new supplier is DigiEffects, which has recently introduced their Damage and Delirium Phenomena packages for FCP X. As the name implies, Damage includes various grain and artifact filters. Delirium is a set of particle-based effects, including fireworks, fire, smoke, fairy dust and a lot more. This is a very nice set of effects, but I’m sorry to say performance in FCP X was poor. Rendering is definitely required. On the other hand, performance in After Effects was really good and there were a lot more filters available. In the end, I’d have to recommend using it with After Effects, but not FCP X.

There are actually some very nice grunge and distress effects that are included with FCP X as built-in effects. These can be found in the Stylize and Looks categories of the effects palette.

You’ll find both color grading looks, as well as filters for film defects, raster effects and others. The best news is that these are optimized to run well in real-time unrendered.

Although this filter might not really be considered a grunge effect, I’m going to toss it in here anyway. That’s the CrumplePop ShrinkRay X filter, which installs into the Stylize category. ShrinkRay X is a type of tilt-shift/selective-blur filter. You can set up several ranges for the blurring, including the main area and three additional patches. You can also control saturation and contrast as an extra bonus. It’s a great little filter when you need that selective focus appearance.

For now, I’ll skip discussion of the effects included in Magic Bullet Looks and Sapphire Edge. They, too, include effects that fit into this post, but since these are filter suites with custom interfaces, I’ll save that post for next week.