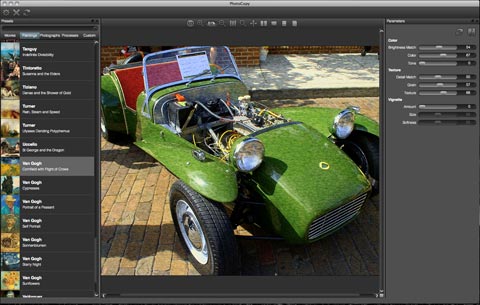 Like guitarists searching for the perfect tone, editors are constantly looking for tools, tips and tricks to give their images a signature look. The newest tool in this elusive quest is PhotoCopy from veteran plug-in developer Digital Film Tools. DFT developed the original 55mm and Digital Film Lab filters, which became part of the Tiffen Dfx Digital Filter Suite.

Many of the competing plug-ins and filters used for color manipulation are based on tools that adjust color, video and gamma levels, while others are designed to mimic favorite photographic filters. PhotoCopy doesn’t use a tools-based approach. It differs from other image plug-ins by using the analysis of existing images and then intelligently applying those parameters to your target clip.

PhotoCopy is available in two plug-in versions: one for motion applications and one for still photo software. Each variation (motion or photo) is sold as a separate product. The motion filter installs into Avid Media Composer, Apple Final Cut Pro and Adobe After Effects, while the still photo version works with Adobe Photoshop, Adobe Lightroom and Apple Aperture.

Once you apply PhotoCopy to a clip in an NLE timeline, you are able to open its custom interface to select, apply and adjust an effects preset. You can access PhotoCopy in a still application by applying it as a filter in Photoshop or using the “edit in” commands of Aperture or Lightroom. All approaches open a separate PhotoCopy application where you do the work. The motion version of the plug-in only opens a floating “mini” version of the app, while the photo version gives you full access to all of the features of PhotoCopy. 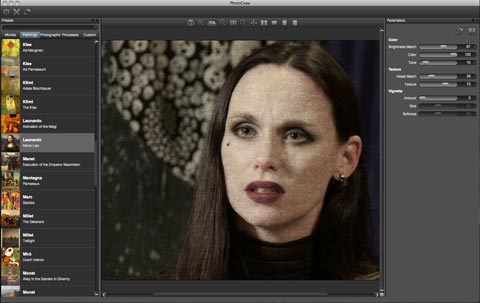 The full PhotoCopy interface is divided into three sections: a selection of presets, the image with the preset applied and adjustment parameters. Digital Film Tools designed its presets based on the analysis of the brightness, color, tone, detail, grain and texture of 94 Academy Award-nominated features, 72 paintings, 40 photographs and 30 photographic processes.

The presets pane is divided into groups (movies, paintings, photographs, processes and user-created custom presets) and each group displays a series of representative images. The analysis of the preset reference image that’s displayed is then applied to your target image. Click on a bleach-bypass-style preset, as pulled from a frame of the film Letters from Iwo Jima, and that color treatment is applied to your image. Scroll down to a blue frame pulled from Master and Commander and your image is changed to blue tones.

These presets are not simply color washes. PhotoCopy uses its image analysis to appropriately tone-map your image in a consistent manner according to the palette of the preset. In the case of presets with grain or paintings with brush strokes, like a Van Gogh, PhotoCopy simulates a grain or brush texture and applies that to your image, as well.

The actual interface differs slightly between the photo and motion versions of PhotoCopy. For example, as a Photoshop filter, you have the ability to see side-by-side, before-and-after image comparisons, which isn’t part of the motion version. PhotoCopy also gives you the ability to adjust the image parameters, including color (brightness, color, tone) and texture (detail, grain, texture). You can also apply and adjust a vignette. These sliders are placed in the standard effects control panel of a motion application like After Effects, but appear inside the custom PhotoCopy interface when used with Photoshop.

The main difference between the photo version and the motion version – and a reason to purchase both – is the ability to create a preset with texture information. Both versions allow you to adjust the parameters of an existing preset and save that as a new variation. In addition, both versions can analyze the source image’s brightness, color, tone, detail and grain and apply it to a target image. The result can then be saved as an entirely new preset. However, the still photo version also lets you create a preset that contains texture information from any image that you supply.

Simply open an image in PhotoCopy from within Photoshop, Lightroom or Aperture and select Create Preset. PhotoCopy will analyze the qualities of your image, including texture information, and apply these as a preset to its default image. Make adjustments to the parameters and save it as a new preset. Now this custom setting, along with a representative thumbnail image, is available in all versions of the filter, including the motion version. Presets can also be imported and exported. 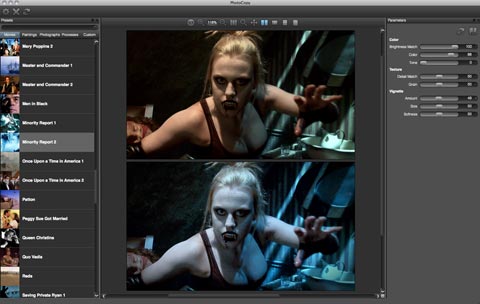 PhotoCopy is a useful tool for establishing a special look for your project, but it isn’t intended as an all-purpose color corrector. Nevertheless, because the presets are derived from an analysis of the palette used in those sample frames – and that in turn is mapped to your image – the result can be the same as achieving that look through more traditional color grading tools. Except that you got there through a single click and a few slider adjustments.

I tested PhotoCopy version 1.0 in both the various motion and photo applications. PhotoCopy worked as expected in all, but there was one issue with Avid Media Composer. Apparently Avid changed how multiprocessing was being handled in Media Composer 5.5, which affected the early versions of PhotoCopy. Make sure you download and install the most recent version of the PhotoCopy plug-in for proper function within Media Composer.

I had no conflicts with Apple Final Cut Pro 7, although there was one minor issue. It appears that clips with the PhotoCopy filter applied stay at full quality (when left unrendered) rather than degrade dynamically under FCP’s RT Engine. As a result, scrubbing through unrendered clips is more sluggish than with other filters when your timeline video quality is set to “dynamic” instead of “high”.

Overall, the plug-in worked best of all with Adobe After Effects CS 5.5, as I would expect. In my opinion, After Effects is simply the most friendly environment for plug-ins. It’s rare to have issues there, as long as you are using a filter designed for that specific version of After Effects. This is especially true with any of the 64-bit versions of After Effects.

I really like the way the plug-in works, but of course, that hopefully will include future compatibility with Final Cut Pro X. At this moment, I would absolutely recommend the 1.0 version for use with Photoshop and After Effects. It offers the editor a great new tool to use in the quest for that unique look.