Blackmagic Design has always been on the cutting edge of technology with an eye towards shaking up the status quo. The acquisition of DaVinci, with the port of Resolve to the Mac platform, promises to be just that. Resolve 7.0 is available for both Mac and Linux and comes in three flavors (not including the workstation itself): Mac software ($995), Mac with a custom-designed Blackmagic Design colorist’s panel ($29,995) and a Linux version with the panel ($29,995 plus $19,995 software). Linux pricing is in addition to the necessary hardware and integration costs supplied by authorized DaVinci/Linux resellers.  The Mac version has sparked the most interest, but even the Linux configurations represent a significantly reduced system price from years past.

DaVinci Resolve offloads processing to a single GPU on the Mac, but can be used with multiple GPUs in a Linux configuration. Resolve achieves its real-time performance on the Mac thanks to leveraging the CUDA technology of the NVIDIA cards. Blackmagic Design recommends installing two NVIDIA display cards (a GT120 for the interface and monitors and a separate Quadro FX4800 for accelerated processing). Currently only Blackmagic Design video I/O cards will work, so if you install two graphics cards, a Decklink card and an external storage controller card, you will have maxed out the available slots on a Mac Pro. The FX4800 card is a double-width card and the recommended Decklink HD Extreme 3D Plus comes with a second bracket for the HDMI connectors, so not everything will fit. You’ll probably have to forgo the HDMI connection for the Decklink. On the bright side, the FX4800 has been replaced by a single-width Quadro 4000 card. So, juggle your Mac Pro slots wisely. (Download the Resolve manual and Mac configuration guide here.)

Resolve is a painless installation on most machines, but I did  have a minor conflict on one system tied into a shared storage network. The networking components of Resolve conflicted with Command Soft FibreJet; however, a friend has Resolve running on a Terrablock SAN without any issues. In addition, the installer adds a number of Blackmagic Design utilities, QuickTime codecs and Final Cut Pro Easy Set-ups. It will flash any present Decklink card with a firmware update and prompt you to install updated drivers for existing NVIDIA cards. Despite my network issue, most of these are harmless; but, to be on the safe side, clone your hard drive before starting. Since new FCP Easy Set-ups have been added, your FCP Preference files will also be deleted and will need to be rebuilt the next time you launch Final Cut Pro. Resolve uses a USB license key (dongle), so no internet activation is required to get started.

Despite what sounds like very rigid configuration guidelines, DaVinci Resolve actually runs on a wide range of hardware, including laptops. The one absolute is that you use a monitor with a resolution of 1920×1080 or 1920×1200. The interface doesn’t scale, so a lower display resolution, like that of a 20” Apple Cinema Display will cause the interface to be cropped and unusable. I tested the software on an 8-core Mac Pro with only the single, stock NVIDIA GT120 card. The trade-off in not having the second NVIDIA card is a loss of real-time performance, but it does work relatively well. Likewise, ATI cards should also work, but according to Blackmagic Design, this is currently untested and considered an unsupported configuration.

Getting to know Resolve

DaVinci Resolve is designed as a full-fledged, standalone color grading application. It is not a plug-in to a host NLE or built around a roundtrip workflow. In addition to the color correction tools, there are ingest, conform, render and output modules. These interact with the Decklink card to accommodate both a file-based and VTR-based workflow, even if no NLE is installed on that workstation. Sequence information can be imported from EDLs or AAF files, but an optional Avid component ($500) must be added to permit access to Avid DNxHD media. Only a single layer of video is supported on a DaVinci timeline.

The basic color grading concepts are not that different from other systems. The adjustments can be applied to both primary and secondary levels, which are handled as nodes. More on that in a minute. Unlike most other products that display lift/gamma/gain correction as a set of graphical color wheels, Resolve uses sliders for luma/red/green/blue values for each of the lift/gamma/gain settings. In addition, there is a separate luma control section, as well as curves. If you intend to run Resolve with only a mouse or tablet, then you will be in for frustration. The l/r/g/b sliders do not gang or work in a push-pull manner when using a mouse, so if that’s you, then curves will be the section you’ll use the most.

The only third party control panel that works is the Tangent Devices Wave ($1,495) and I feel that’s the absolute minimum surface to buy, if you intend to use Resolve frequently and productively. Of course, if you intend to establish a dedicated DaVinci suite, then it makes sense to spring for the more expensive Blackmagic Design control surface. Another consideration for a real grading suite would be scopes. Resolve includes a set of integrated software scopes (waveform, parade, vectorscope), but for better signal monitoring, I would highly recommend equipping the room with a Blackmagic UltraScope, as an ideal companion product.

A parallel node is one that is used to extract mask information from any earlier node, in order to apply it later in the chain. By using a parallel node the information isn’t contaminated by other corrections done in the in-between nodes. For example, you might create a parallel node with a key based on an actor’s skin color. This parallel node could be applied downstream as the mask for one node to correct the interior (the person’s skin tones) and a second node for the outside area. Although this might some confusing, it’s the same concept as is used in any node-based compositor.

There are the standard shape and keying tools, but a real hallmark of Resolve is a superb tracker. Simply add a shape around a region to be analyzed and the tracker will automatically create a cloud of tracking points. It is very fast in generating tracking data and was flawless on my test shots.

Although I didn’t test any 3D content, both DaVinci and the Decklink HD Extreme 3D Plus card are ready for stereo 3D projects. This means that the same grade can be applied to left and right eye files and a stereo 3D view can be monitored through the card. The Decklink card will pass a 3Gb/s signal, which will accommodate two HD streams over a single cable.

I ran a series of tests using different flavors of Apple ProRes media. In spite of having only the GT120 card, ProResLT at 25fps ran at close to real-time with primary correction. Adding a couple of nodes dropped the playback rate to under 20fps, but still tolerable. On a different testing session, I had two monitors connected and was using standard ProRes media at 29.97fps. Here I noticed more sluggishness as the rate dropped to under 10fps. Obviously, the extra FX4800 card would be a major performance boost, however, rendering was still fast.

A big selling point for Resolve is the ability to take in a single clip of self-contained media for a commercial or show and then use an EDL to frame-accurately parse that clip into individual shots on the Resolve timeline. This isn’t unique, but Resolve does it very well. I wasn’t quite so lucky when I took an FCP project (as individual media clips) into Resolve using an EDL. Quite a number of the shots were linked to the wrong clip. This project originated with a Canon 5D and had some repeating timecode and no actual reel numbers. Although the clips had unique names, Resolve had trouble getting it right. I suspect that using EDLs for file-based projects is still being tweaked at DaVinci.

In spite of being new to the Mac platform, Resolve is already a seasoned product, known for being the DI tool of choice for numerous blockbuster features. This maturity shows in things like a solid integration of RED’s SDK for camera raw REDCODE media files. RED footage enjoys the option of source correction, which can be globally adjusted for an entire project. The raw settings for individual shots can also be directly altered in the timeline, so you can start with an overall setting for all RED clips and then fine-tune individual shots as needed. 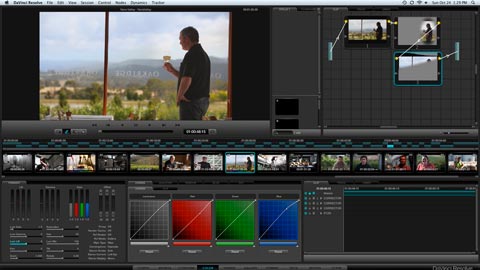 Overall, I was happy with the results I got with DaVinci Resolve. It’s a great tool, but mouse operation can be frustrating. Whether or not the toolset is to your liking is strictly a matter of taste. I wish it had a plug-in architecture, as some of the more exotic results you can get by using filter effects in Apple Color or a with a filter like Magic Bullet Looks just aren’t available. There is a built-in blur tool, but it isn’t as smooth nor achieves as extreme of a blur as many other types of Gaussian blur filters.

Blackmagic Design has set out to shake up the high-end world of color grading, by offering the industry’s leading name-brand product at a price range that’s affordable to smaller shops and entrepreneurially-minded colorists. Whether Resolve on the Mac does to color grading what Final Cut Pro did to editing has yet to be seen. Nevertheless, DaVinci Resolve on the Mac puts a product designed by years of input from the world’s leading colorists into the hands of editors and colorists at all levels.

Written for NewBay Media LLC and DV and Videography magazines.