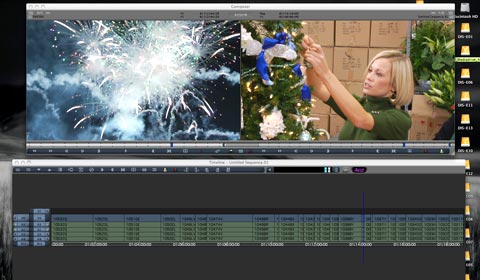 Earlier this year Avid released the 3.5 version of Media Composer software, as well as the corresponding versions for NewsCutter and Symphony. Media Composer 3.5 included more change and innovation than a typical .5 software release. Besides many small improvements, there are three big features promoted with this release: software activation, 3D stereoscopic editing and Avid Media Architecture (AMA).

For many years, Avid systems have been tied to a hardware license key, a.k.a. the dongle. This USB device enables licensed installations of Media Composer, Symphony or NewsCutter to work on any computer to which it is connected. Install Media Composer on a PC workstation in the office and a MacBook Pro for the road and simply change from one to the other by moving the dongle.

Media Composer 3.5 introduced an optional software activation similar to that used by Adobe. Opting for software activation disables the dongle and from then on the system is authorized over the internet. Like Adobe, you may install the software on as many computers as you want, but when you change from one to another, you have to deactivate the first computer and then reactivate the second computer.

You have the option with 3.5, but Avid has switched to only software activation with Media Composer 4.0, which became available during September. Existing customers who are upgrading to 4.0 and already possess a valid dongle, will be able to flash them and continue to use dongle authorization. One cool aspect that shouldn’t be overlooked is that you may now download and use a full version of Media Composer for a free 30-day trial without dongle or software activation. This try-and-buy offer is an excellent way for anyone new to Avid systems to get comfortable with Media Composer.

Avid Media Composer 3.5 became the first creative editing application to let editors work with – and display – 3D stereo content, without the need for a third party plug-in. Other NLEs, like Quantel iQ Pablo, have already offered 3D capabilities, but these systems are generally used for DI finishing and not creative cutting.

Footage recorded for 3D productions, using either side-by-side or over-under camera configurations, is stored in two sets of image sequence files. These correspond to the left and right eye views from each camera. Avid offers MetaFuze – a free Windows utility – to combine these files into a single Avid-ready MXF media file. The MXF file contains the muxed – or “fuzed” – images in a common stereo format. Media Composer’s 3D stereo preferences can be set to off (you’ll see an over-under image), left eye only, right eye only or checkerboard (an interlaced view of the left and right eye images).  Media Composer 4.0 also adds a side-by-side view. In addition to stereo image files, MetaFuze 2.0 will also transcode native .R3D files from the RED One camera.

During normal editing, the editor would set the system preferences to left or right eye only in order to display normal images for cutting. You wouldn’t want to cut with the over-under or checkerboard display. When it comes time to screen a rough cut with a director, the editor would switch the system to checkerboard, don 3D glasses and view the playback as a stereo image. Unfortunately, this comes with a few caveats. Viewing the image in 3D requires a 3D-compatible LCD screen, plasma screen or projector with active glasses and an emitter. You cannot use a software-only Media Composer and expect to switch to full screen playback and see proper 3D on your standard computer display.

There are no controls to correct or alter convergence. 3D finishing systems, like Quantel, offer such control, which can be used to enhance the stereo effects or lessen issues that might cause eye strain and headaches. Avid uses half-resolution images, meaning that a 1920 x 1080 left or right eye frame is only 1920 x 540. The two files are then interlaced to create a single, combined 1920 x 1080 frame. Finally, Avid offers no 3D finishing path within its own product line. You can’t take a Media Composer project to an Avid DS and create a 3D stereo digital cinema master. Such a master would require full-resolution left and right eye images in a 48fps format. Currently Avid recommends that you export an EDL, AAF or Filmscribe XML file for finishing in a DI system, such as Quantel iQ Pablo.

I haven’t cut a 3D project yet, so the whole stereoscopic buzz is lost on me. I understand the box office argument, but I feel that the size of the potential user market isn’t big enough for Avid to spend precious R&D resources on. But, if you are cutting a 3D film without Avid’s new stereoscopic features, any 3D test screenings during the course of locking the cut come with a lot more effort and cost. If you are working on such a project, Media Composer’s 3D stereoscopic solution will definitely save you money.

Avid Media Architecture (AMA) is a new plug-in API, like Apple FCP’s Log and Transfer. AMA gives Media Composer the ability to take native media from a card, disk or volume and open it directly into Media Composer as a bin. No import or ingest required and it comes complete with all the camera-generated metadata. Avid must work with the camera manufacturers to write drivers for AMA. Right now Sony (XDCAM), Ikegami (GFcam,) and Panasonic (P2) are onboard, but there is hope that others, like RED, will join the party.

I tested AMA with both P2 and XDCAM-EX media. It works well if you stick with Avid’s recommended practices, but isn’t foolproof if you deviate. One of the P2 shooters I work with clones his cards to small USB drives. The result is a partition that mounts for each card. 13 cards means 13 hard drive partitions on my Mac desktop. The Media Composer “Link to AMA volume” command opens each partition as a bin, which is populated with clip data and is ready to edit. Unfortunately, Media Composer had trouble tracking this many different AMA volumes. After a few times opening the project, it would start to lose links to the media and more and more clips would show up as “media offline”.

Then I tested a different approach, which proved more successful. I took the same small drive and copied the contents of each partition to folders on my local drive, being careful to maintain the P2 folder structure. By doing this, it was possible to load any or all of these folders into Media Composer by designating them as AMA volumes. Avid further recommends to consolidate media that you intend to keep. Consolidation copies the native files into a standard Avid Media Files folder. In either case, my test project continued to work well with either AMA or consolidated media.

AMA offers various workflows. If you are cutting fast-breaking news, you’d probably just link to an AMA volume and cut directly from the native media. This could even be a P2 card or XDCAM disc pulled directly from the camera. A film editor would take a different approach. A digital feature project might start by linking to the AMA volume for each day’s dailies. Then transcode those clips to Avid’s DNxHD36 lightweight editing codec. Move the transcoded clips to a new bin and delete the AMA bin. When you are done with the rough cut and ready to finish at a higher resolution, simply link to one large AMA volume containing the native camera media. The files open into Media Composer as one or more AMA bins. Finally, relink your edited sequence to those files.

The dongle, 3D images and AMA have received the most attention, but there are two additional new features worth noting in Media Composer 3.5. That’s the new FluidStabilizer and the SubCap generator effect. SubCap is a both an effect and a method to add open captioning to your sequence. You can import text files of the dialogue and set a look based on style sheets. Previously this function required everything to be built from scratch or to use one of the several plug-ins developed for captioning. Now you can do it within the basic feature set of Media Composer. SubCap will be welcomed by editors posting foreign language projects or other open captioned shows, such as museum presentations.

FluidStabilizer is a stabilization and tracking effect based on Avid’s FluidMotion technology. Instead of specifically adding a number of tracking points on the screen, simply use FluidStabilizer or FluidTracker. You can set one point on the image and the tracker will automatically set a number of surrounding tracking points related to that original point. It will then track this “cloud” of points to derive a motion path. If you are trying to stabilize a shaky image, then simply increase the scale to get rid of the frame edges. After the track has been analyzed, Media Composer will playback the stabilized shot in real-time.

The big news of Avid Media Composer 4.0 is to improve the openness of Avid’s “open timeline”. Prior to this release, you could only mix media with matching frame rates, so mixing 720p/59.94 content with 480i/29.97 and 1080i/29.97 wasn’t always practical. Those barriers are now gone, which means that Media Composer editors will finally be able to freely combine various video resolutions and frame-rates onto the same timeline.

As a whole, Media Composer 3.5 and now 4.0 are very healthy updates to this professional editing tool. It proves that even in challenging financial times, Avid is continuing to invest in its development effort. This gives experienced users a reason to stay with Media Composer and first time Avid editors a toolset that’s hard to resist.