Music choices are very subjective and can often be the most difficult part of finishing a production. There is no replacement for a true custom score that’s right on the money, but rarely do clients have a budget to support that, especially in the world of corporate video. I’ve frequently built videos with music changes every :30 or so. I’m essentially scoring the video without the help of a composer. That takes a lot of time to audition cues online through a needledrop library like Killer Tracks and often clients don’t have the budget to pay for 20 or 30 cues on a longer production. This is where royalty-free music sources can really shine. There are various options, including the music cues that come with Apple Soundtrack Pro or Adobe Soundbooth, but neither of these options is as comprehensive as SmartSound. 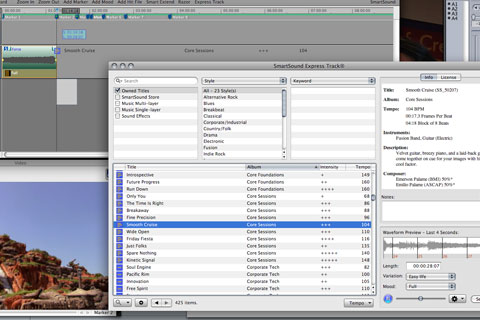 SmartSound is really two entities – the Sonicfire Pro music customization software and the supporting SmartSound music libraries. In order to get the best out of Sonicfire Pro, you really need to use SmartSound music. To build up my own library, I treat myself to a few new discs each Christmas and whenever a new project can support it!

The Sonicfire Pro software lets you non-destructively change the variation (arrangement), “mood” (orchestration), tempo and length of these music selections. It can do this because each song file is made up of blocks. When you change the duration or pick a different variation to a song, Sonicfire Pro intelligently rearranges the block to avoid something that sounds overly repetitive. The newer offerings in the library include “mood mapping”. This means that the discs are multilayered with instruments mixed into stems – rhythm, lead, percussion, etc. Inside Sonicfire Pro, you can change the “mood” by selecting from a preset or by changing the relative mix of these stems.

Compositions are based on a fixed tempo measured in BPM (beats per minute). If setting the duration doesn’t quite nail the length you need, you can also alter the tempo. This changes the metadata for the cue and speeds up or slows down the song by altering the BPM. This is a non-destructive process, so tempo files can be deleted and the original native BPM restored. Remember that these song arrangements are made up of real instruments and real compositions, not simply a series of loops in the way that a music cue might be created using Apple’s Garageband.

The Sonicfire Pro interface works in two parts: the SmartSound Express Track window and the project (timeline or tracksheet) window. Express Track is a smart media browser that lets you search, audition and modify your music selections. It also lets you browse SmartSound’s online library for additional music. Express Track also displays composer and license information that may be used for music licensing cue sheets. Many editors mistakenly believe that they have unlimited rights to use royalty-free compositions for any purpose. SmartSound music covers most typical productions, but not everything. For example, you are covered for regional TV spots, web videos, film festivals or cable networks like Discovery; but, you are not covered if your show runs on HBO or if Warner Bros. buys your film and distributes prints to thousands of theaters. Check with SmartSound if you have licensing inquiries. 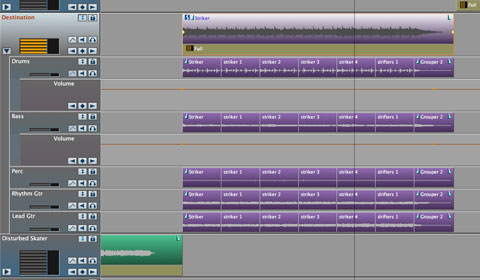 Most of the actual music adjustment is done in the project window. Music is inserted onto a track and the song’s length can be adjusted by dragging the end of the selection. Each song is composed of an arrangement of separate thematic subsections that are each made up of blocks. You can opt to protect certain of these arrangements as you lengthen or shorten a track. This prevents Sonicfire Pro from completely changing the arrangement based on its internal algorithms. The subsections change at keyframed points and the keyframes can be slid earlier or later, thus changing when one subsection transitions to another within the same song. 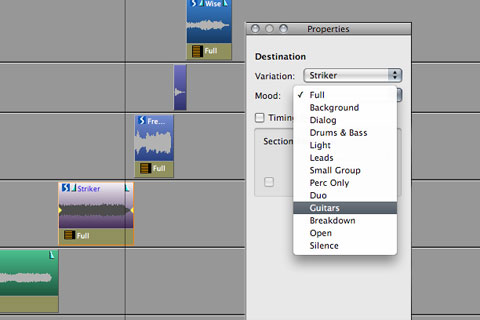 You build up your score by assembling various music cues onto separate tracks, complete with crossfades and even add “hits”, like a cymbal crash, bell effects and more. A multilayered or “mood-mapped” cue can be split into sections on the same track to change the mood within that music cue. For example, if your video starts and ends with a high energy visual montage that bookends a talking-head spokesperson in the middle section, simply add a mood change at the start and end of this dialogue sequence. Choose a more subdued variation in the mood setting or manually reduce the level of some of the more intrusive instruments by using the property sliders or the appropriate volume envelopes in the tracksheet.

What about Final Cut Pro?

So far this has been a quick overview of how Sonicfire Pro 5 Scoring Edition works in general. SmartSound has worked with numerous NLE manufacturers over the years and in fact, has already developed timeline integration with Avid Media Composer, using MetaSync tracks. New since NAB 2009 is Sonicfire Pro 5.1 with the Final Cut Pro plug-in.

To use Sonicfire Pro with Final Cut, simply edit your FCP timeline as you normally would, adding markers to indicate music changes or the start/end points for a music cue. Once you’ve edited the sequence, save it and leave FCP open. Now launch Sonicfire Pro. The first way is simply to select individual songs and customize them to length. To do this, choose “import from Final Cut Pro” in the Express Track window’s right-hand slide-out drawer. Your FCP markers will be displayed with timing information. By highlighting a marker or a range of markers, Sonicfire Pro will customize the length of the song to fit that duration. 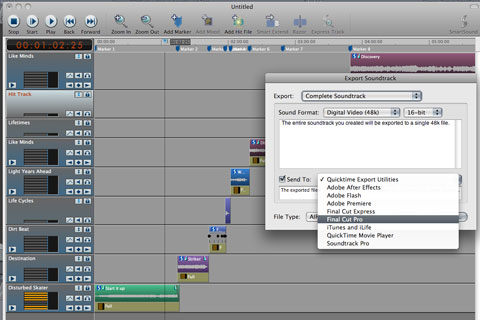 When you are done, choose “Export Soundtrack/Video”, check Final Cut Pro in the dialogue box and save the file (now a rendered/flattened AIFF). It will appear in your FCP browser, so drop it on the timeline and continue. If you need to roundtrip back to Sonicfire Pro, make sure you have set up your FCP preferences so that audio files use Sonicfire Pro as the external editor. If so, right-click the clip on the timeline and select “Open in Editor”, which sends you to Sonicfire Pro. The app knows to pull up that song and you are ready to make adjustments. Make the changes, export again (replacing the previously exported file) and FCP will reconnect to the newer media. 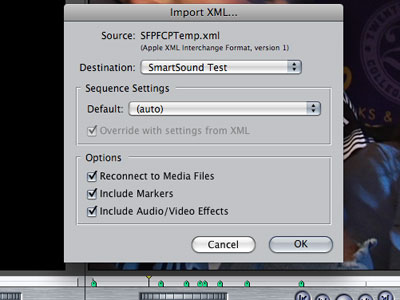 The second and more fun way to work with the two apps is to use Sonicfire Pro to score your complete FCP sequence. Choose “Import from Final Cut Pro” twice: once in both the Express Track window and again into a new project (under the file menu). If you exported a QuickTime reference file of your FCP sequence, you can also open this in Sonicfire Pro to sync the timeline and video. When you do so, the FCP markers will also show up in your Sonicfire Pro project timeline. You can also import the soundtrack from your video (presumably dialogue) and do a final mix right inside of Sonicfire Pro. In any case, this is a great way to make sure your music is perfectly customized to match your FCP sequence. When you are done, “Export Soundtrack/Video” (choosing FCP again) and your mix appears inside your FCP browser. 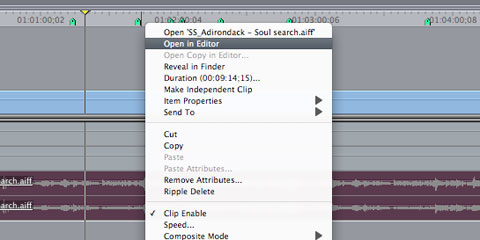 Over the years, I’ve been a happy SmartSound user. I like the quality of their compositions and I really appreciate that they continue to add to the available library. Although the newest selections are multilayered, that doesn’t obsolete the older, non-layered music. In fact, I still use QuickTracks, which originally came bundled with Premiere 6.5! As I said at the beginning, music is very subjective, so there’s no guarantee that a large SmartSound library is really going to cover every client’s need – but it sure helps. The new FCP plug-in simply makes it easier to use Sonicfire Pro and FCP together.

SmartSound has provided a number of video tutorials on their website that offer a better look at how the whole process works.