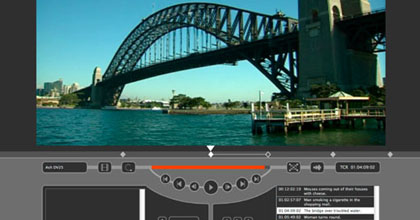 Periodically I review various tools that enhance the editor’s creative options and make editing workflow more productive. One company offering such products is Digital Heaven – an English software developer that grew out of Martin Baker’s creative editorial shop. Baker, a former Avid DS editor, took to Apple’s Final Cut Pro for his own shop and started developing useful applications to enhance this ecosystem.

Digital Heaven’s MovieLogger is a very simple logging program designed for transcribers, loggers and assistants who might not be comfortable with an editing application. Those who’ve never used Final Cut Pro may find the interface daunting if all they need is to log footage. MovieLogger is a Mac OS X media player application that opens and plays QuickTime movies. The operator can add markers and comments at points along the clip’s timeline and save these to the log.

Upon opening MovieLogger you first save your work as a project file. Each project file can hold information for up to sixteen QuickTime movies, before a new project must be started. The interface is simple and elegant with very precise control of the playback, jogging and shuttling of movie clips. In literally five minutes someone with basic logging skills is ready to use MovieLogger. One killer feature is a jump back command where the playhead will jump back a user-configurable number of seconds and playback continues automatically. As part of the project, the application also reads timecode and reel names embedded in the QuickTime movie’s metadata. When logging is completed, the files can be exported in either Rich Text Format (.rtf) for printing or as XML files that can be imported into Final Cut Pro. Once you import these XML files into Final Cut, the markers and comments show up in your project browser and the clips are linked back to the QuickTime media files. 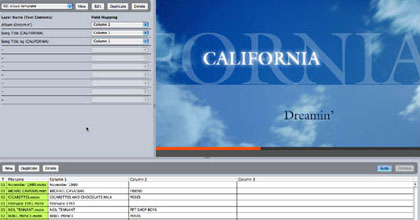 When you purchase or upgrade to Final Cut Studio you also get Motion, a powerful effects and compositing application. It’s easy to build title animations in Motion and place them directly on a Final Cut timeline as an FCP effect without any prior rendering. Motion permits the creation of templates for frequently reversioned animations, such as TV promo end tags and lower third supers, which brings me to Digital Heaven.

Fancy lower thirds are great, but if you have a ton of them and have to type all the names by hand, if can be very time consuming. Digital Heaven’s AutoMotion is designed to automate the process. After all, someone probably had to type all those names on a script to begin with, right? AutoMotion combines a list of names with a set of Motion templates to create new Motion project files automatically. These Motion files can be placed onto an FCP timeline and voila, instant lower thirds.

The first step is to create a series of names and titles in a spreadsheet program, like Excel. This file is saved in a Tab Delimited Text format, which in turn can be imported into AutoMotion. The text file shows up as a set of fields with the same names and titles as in the spreadsheet. The editor then assigns a template to an entry row and the field (name, title, etc.) that corresponds to a specific text field of the template. Templates are easy to create and save in Motion, so you aren’t limited to the same handful of styles. Templates can include any of Motion’s animation, text effects, filters or media clips. So now if your show has one hundred lower third supers and you want a nice title treatment to establish a graphic look for your show, the process can be extremely quick and simple and will save you from the wrist stress such typing would have caused. 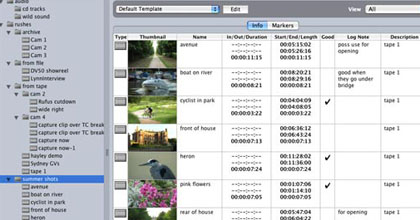 There’s a lot more available from Digital Heaven, such as Big Time, which adds a large timecode display on screen from a Final Cut Pro timeline. This is something many Avid editors who are now using Final Cut requested and Baker was able to oblige. Another useful piece of software is EDL Mirror. This takes a standard CMX 3600 edit decision list and places all the record times into the Source In and Out columns. Modifying an EDL in this manner enables you to capture a single edited master tape, but have the individual shots show up as discrete clips in your bin. This becomes a godsend if you use your favorite NLE to color correct an already edited master. Without this you would have to manually find all the cut points and “razor blade” a new edit on the cut in the timeline.

Last, but not least, look for Final Print, a standalone application that prints a list of markers from a Final Cut Pro sequence. Comments and fixes are noted as markers directly in the Final Cut Pro timeline, which is exported to an XML file. Final Print opens the XML file and displays a list of clip and sequence markers along with name, comment, timecode and thumbnail image. The list can be printed or saved as a PDF file.